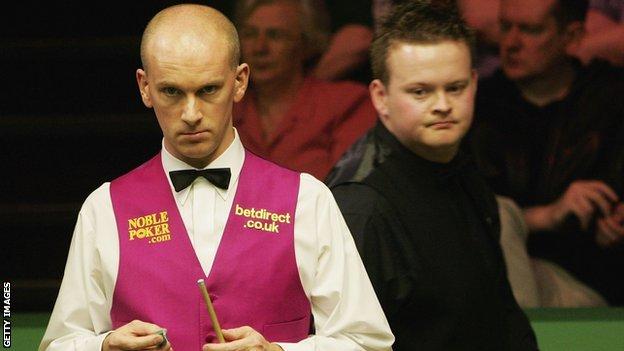 The battle of the former World Champions was won by Peter Ebdon as he defeated Shaun Murphy 5-4 in the quarter-finals of the Australian Open.

In a high quality match, the pair traded century breaks as well as a 79 from Ebdon and 94 from Murphy.

But having ground down Ding Junhui in his last match, Ebdon was in fluent form as a knock of 56 sealed his place in the semi-finals against Marco Fu.

Ebdon was thrilled to have triumphed in his third consecutive final-frame decider of the tournament, and said: "Shaun is an absolutely world-class player, former UK, former World champion and I knew it was going to be tough.

The 39-year-old Mark Davis recently won the Six-red World Championship defeating Shaun Murphy 8-4 in the final. The £40,000 winner's cheque was the biggest of his career

"Even though neither of us really played to the best of our ability, it was still a very tough match and I think that in parts Shaun was cueing beautifully."

His opponent in the next round, Hong Kong's Fu, had no such problems as he despatched Lee with ease.

"I felt relaxed out there and I'm very happy with my form," he said. "I'm happy to be in the semi-final, I'm still in the tournament.

"I'm just going to enjoy the occasion. It will be a good game with Peter."

Davis, 39, had never reached the semi-final of a ranking event in his professional career until the Wuxi Classic last month.

And he made it two in a row after a 5-3 victory over Martin Gould. He will face Hawkins who defeated the tournament's surprise package Matthew Selt 5-3.