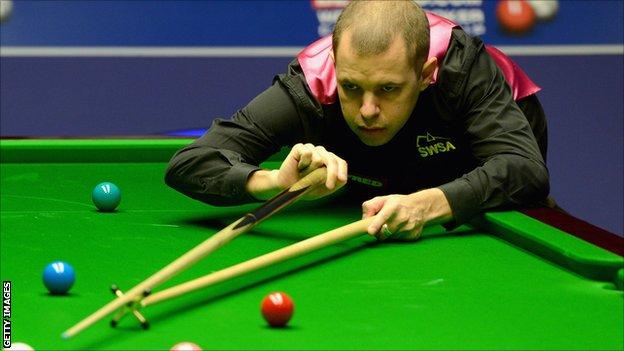 Hawkins, ranked 23, was in immaculate scoring touch and dominated the final, with consecutive 106 and 114 breaks giving him a 4-1 lead.

Ebdon came back into the match at 5-3 before Hawkins took the final four frames without reply to seal victory.

"Winning my first ranking event feels quite strange," said Hawkins. "I don't think it has sunk in yet, I feel quite calm. It'll probably sink in more when I get home and see the family.

The Kent man becomes the 50th winner of a ranking event

"I'm delighted obviously and it could be a big moment in my career hopefully. I just can't believe it.

"Obviously it's going to give me a bit more confidence, well a lot of confidence to be honest and hopefully I can win another tournament. But it's so tough, just to win one is an achievement."

Opponent Ebdon was magnanimous in defeat and said after the match: "I didn't have a very good day at all, nothing really went for me and I really struggled out there in all departments and it's very disappointing.

"I'm delighted for him, that he's won his first ranking event. I would have rather that it hadn't been against me in the final, but he's been a winner waiting to happen for quite some time."