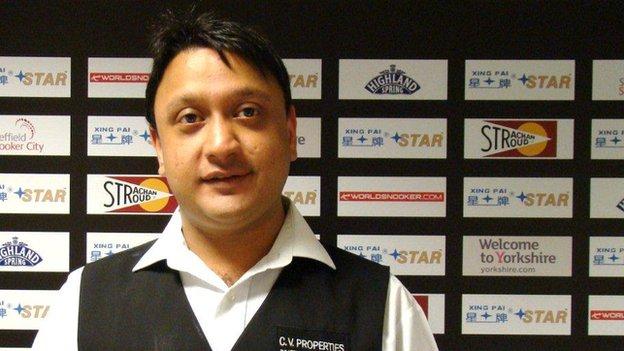 Joe Jogia has been banned until the end of the 2014 World Championship after a probe into suspicious betting patterns.

Jogia was provisionally suspended after an unusually large amount of small bets were placed on Matthew Selt to win their shoot-out match in January.

Jogia, 36, was also orderered to pay £2,000 towards the cost of the hearing and investigation.

An investigation found that 19 bets were made or attempted on Selt to win at different betting shops in the Leicester area.

A total of 14 bets with a combined value of £4,830 were placed and four bets worth £2,300 and another bet for an unknown amount were declined.

Rule 2.1.4.1: (It shall be a breach of these rules for a member) to engage in any other conduct that is corrupt or fraudulent, or creates an actual or apparent conflict of interest for the member, or otherwise risks impairing public confidence in the integrity and/or the honest and orderly conduct of the Tour and/or any Tournament or Match

Jogia, who is ranked 57 in the world, withdrew from the match with a twisted knee.

A WPBSA statement said: "It was established that the two persons placing the bets were known to Joe Jogia as associates."

It went on: "Following the placing of bets, Jogia was in repeated contact with them. There was no contact prior to 16 January, then he sent 33 text messages and made three calls to one of the persons placing the bets and 42 text messages and one call to the other.

"Jogia has failed to provide a consistent or detailed explanation as to the reason for the contact.

"Although there was no evidence to show that Jogia would have gained financially, the disciplinary committee found that the frequency and timing of this contact, his lack of a consistent explanation for the contact and the suspicions raised by the pattern of bets placed by his associates, created an actual or apparent conflict of interest for him."

WPBSA chairman Jason Ferguson said: "In protecting the public image of our sport, the WPBSA has strong links with the gambling commission and the betting industry.

"The integrity of our sport is of paramount importance and the outcome highlights how seriously the WPBSA will treat such matters."

After his provisional ban, Jogia told the BBC in June that his treatment by the WPBSA was "a complete and utter disgrace".