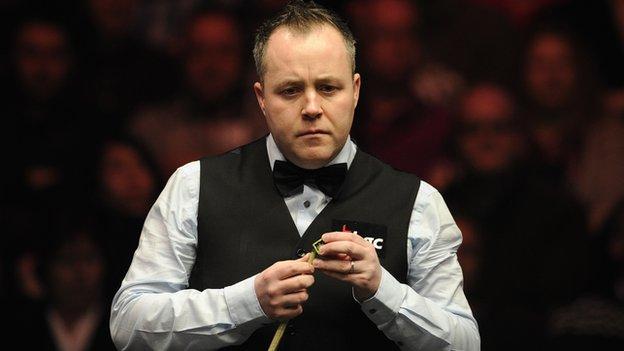 Four-time world champion John Higgins was beaten by Cao Yupeng in the first round of the inaugural International Championship in Chengdu, China.

The Scot, who won a thrilling final in last month's Shanghai Masters, was beaten 6-3 by his Chinese opponent, who is ranked 66th in the world.

There were also first-round wins on Monday for Welsh pair Matthew Stevens and Dominic Dale.

Stevens overcame China's Zhao Xintong 6-5, having led 4-1 but then finding himself pegged back at 4-4 and 5-5.

Dale triumphed 6-3 against Scotland's Graeme Dott, who had led 2-1 before Dale won five of the last six frames.

Another Chinese player, Lu Ning, beat England's Barry Pinches 6-5 in the wildcard round to book his place in the first round proper.

Higgins said: "It's a big tournament so I'm gutted to go out in the first round.

"I started well but then I missed a lot of chances and I didn't deserve to win. Cao is definitely one to watch."

His opponent added: "I'm very excited to beat such a great player. I fell behind but I really wanted to show what I could do, and after the first two frames I played better. John started well but then he faded."

Cao will meet either Mark Allen, who he beat to reach the last 16 of this year's World Championship in a controversial encounter, or Robert Milkins in round two of the £600,000 world ranking event.

Selby will face the winner of Tuesday's first-round match between Lu Ning and Ricky Walden.