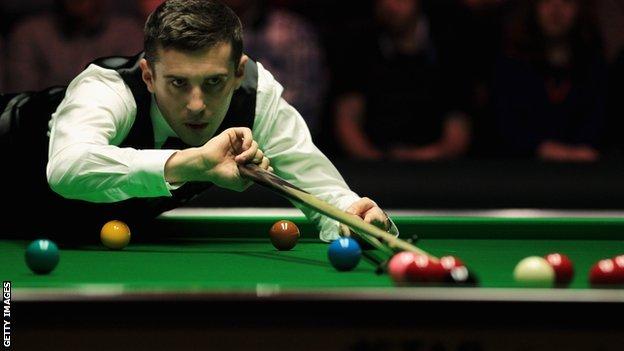 World number one Mark Selby went out of the International Championship in Chengdu, China in a marathon 6-3 defeat by Ricky Walden.

Walden had a 4-0 lead before Selby recovered, only for the world number 13 to seal victory after 01:00 local time.

Elsewhere, Judd Trump eased to the quarter-finals with a brilliant 6-0 demolition of India's Aditya Mehta.

Breaks of 98 and 62 had Trump 4-0 up, with a clearance in the fifth coming before he sealed the whitewash.

Lu benefited from the withdrawal of Ronnie O'Sullivan in round one, but beat Dominic Dale 6-5 in the last 16.

The Chinese came from 3-1 down, then pegged Dale back when the Welshman twice moved one ahead.

In the decider he was 14 in front with the colours remaining, only for Dale to foul and allow the youngster to seal victory.

Robertson moved into the quarter-finals with a 6-2 win over Matthew Stevens, the Australian notching a century break to take a 2-1 lead before sealing victory with runs of 75 and 85.

Murphy held off a fightback from home favourite Ding Junhui to win 6-4, while Fu triumphed 6-4 over Mark Davis in a match that was held over until the end of the evening session because of slow play in the afternoon.

while Marco Fu and Mark Davis will have to conclude later on Wednesday as slow play meant they had to give way to the evening session with Fu 5-4 ahead.