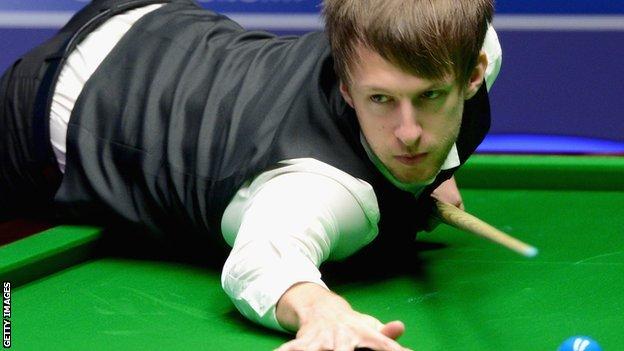 Judd Trump will face Peter Ebdon in the semi-finals of the International Championship after a thrilling 6-5 win against Mark Allen in Chengdu, China.

Trump needed a break of 60 in the deciding frame to see off Allen, while Ebdon routed Ricky Walden 6-0.

He will face another former world champion, Shaun Murphy, in the last four, after he beat Marco Fu 6-4.

World number two Trump, 23, has not won a ranking title since December when he claimed the prestigious UK Championship.

He recorded a break of 107 in building a 5-3 advantage but Allen, who had earlier compiled a 121, reduced the deficit with a 104 and then took the match to the final frame when he came from 41-0 down.

After Trump's 60 in the decider, Allen left a red to a centre pocket and his opponent made no mistake to secure the match.

"It was a good game, we both played well," he told World Snooker's official website. "I had a good lead then I was just trying to finish it off.

"I kept going into the pack and landing on nothing so I was getting frustrated. But I just had to try to stay patient and wait for a chance.

"It will be a different challenge against Peter. I'll just have to play my own game, try to get in front and try to dominate the match."

China Open champion Ebdon put together a top break of 81 as he eased past Walden and remains on target for his second 2012 title in the country.

Robertson, who became the first Australian to win the World Championship in 2010, proved too strong for Chinese teenager Lu, who had stunned Dominic Dale in the second round.

"It was strange playing someone so young," said the 30-year-old Robertson. "It made me feel really old. I had to use all of my experience, especially in the close frames. I won two on the black otherwise it could have been different. Lu has got a tremendous future."

Murphy, the 2005 world champion, was 3-1 behind against Fu, but compiled a break of 129 in an impressive recovery.