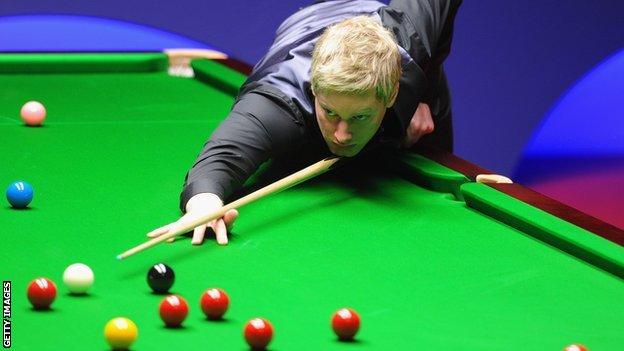 Neil Robertson will meet Judd Trump in the final of the inaugural International Championship after a 9-5 victory over Shaun Murphy.

The Australian trailed 3-1 early on, but eased to a comfortable victory in Chengdu, China.

"Shaun played a lot of good safety so I'm just happy to have got the better of him," said Robertson.

The 30-year-old will now meet world number one Judd Trump, with the winner collecting £125,000.

The final will see the climax to the richest tournament ever staged in Asia, and the joint second-richest ranking event on the annual calendar, behind the World Championship.

Robertson, the world number eight, reached his first ranking event final in China thanks to an impressive win over 2005 world champion Shaun Murphy.

He fought back from two frames behind to lead 5-3 in the first session, compiling a tournament-best break of 142 on the way.

He led 7-5 at the interval of the evening session, but looked in danger of losing the 13th frame when Murphy produced a snooker on the blue.

However, a mistake on the safety allowed Robertson to take the frame, with the left-hander then swiftly wrapping up the match.

Robertson said he was proud of his achievements so far, but was wary of Trump, who secured his place in the final with a 9-1 thrashing of Peter Ebdon.

"To be in my first final in China is a really proud moment for me," he told the World Snooker website.

"Judd has changed his game, he doesn't go for as many shots as he used to and his safety has improved.

"He is number one in the world now so he's full of confidence. He's fantastic for the game and he has fun and enjoys his life, as he should do. Hopefully it will be a great match."