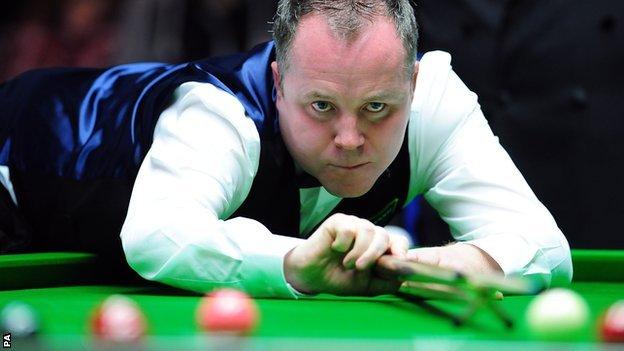 Three-time champion John Higgins snatched three frames in a row to defeat Michael Holt 6-3 in the first round of the UK Championship.

The Scot knocked in a 116 clearance in the third frame, the highlight of an otherwise unspectacular encounter.

However, two-time champion Ding Junhui suffered a shock 6-4 defeat to qualifier Ryan Day and goes out.

Ding raced into a 2-0 lead, firing in a 106 in the process, but Day took two out of the next three frames. Ding went ahead again for a 4-3 advantage, but Day stroked in a 100 break on his way to three consecutive frames and a surprise victory.

"After his shock first-round exit to Ryan Day at the World Championship in the Spring, Ding must have expected to exact revenge here, but he was second best once again. The Chinese started confidently, a century break taking him 2-0 up but Day responded superbly and held his nerve to complete another famous victory. The Welshman looks to be getting back to the sort of form that saw him among the world's top eight players a few seasons ago. Ding, twice a UK champion but still a big underachiever at the Crucible, will have to swallow this disappointment and look to the Masters next month."

After his victory, Higgins felt confident of being able to continue to challenge the best in the sport.

"I think I'm still good enough to compete for the next few years," he said.

"Judd is going to be at the top of the game for the next 10 years, easy, so it's up to myself to try to stay there and produce better form.

"Not being big-headed, but it will happen in more tournaments than not. If I put the work in, I'll come through and do pretty decent."

Early signs in the Higgins-Holt clash indicated that the match may be decided in the final frame, but Higgins showed his class to advance.

But it was not a match that will go down as a classic, with just one century being compiled.

Holt had his hand on the table numerous times, but was unable to make sizeable, frame-winning contributions. Had he taken his chances, the scoreline could have had a very different look to it.

In a cagey opening, it was Higgins who took the first frame of the match, after both players missed opportunities when in amongst the balls, but 'The Hitman' hit back in the next with a confidence-boosting 67 break.

Higgins took full advantage after being offered an opening by his opponent and a superb split into the pack of reds set the platform for the only century break of the match - the 116 clearance.

Sixty ahead in the next, Holt thought he had the frame wrapped up with only 59 remaining on the table, but Higgins returned to the table and laid on a snooker. Holt missed the last red but with the frame at his mercy, Higgins was unable to make a clearance after a poor positional shot on the green, much to the relief of his adversary.

The trading of frames continued as the pair shared the next two to go 3-3, but the four-time world champion opened up a two-frame advantage for the first time in the match, capitalising on Holt losing position once too often to go one away from victory.

Higgins took the match with his third straight frame to ease into the next round of the tournament.

Meanwhile, Barry Hawkins, who won the Australian Open earlier this season - the first ranking title of his career - went through to the second round after beating China's Liang Wenbo 6-4 and Stephen Maguire defeated Fergal O'Brien 6-2 with breaks of 102, 104 and 131.

Selby, who has a slim chance of reclaiming the number one position this week, finished his match with a break of 105.

"With the way my season's gone so far, I was under a lot of pressure coming here for the first round so even though I didn't perform and make break after break I'm still happy with the win."

In the other match the tenacious Dott recovered from 5-3 down to claim victory, sealing his comeback by sinking a decisive long red in the final frame.

"I never really thought I was going to win," said Dott.

"I struggled all the way through the match. I was cueing terribly. Sometimes I win matches like that and I never really know how I've won them.

"I think Martin played better than me. I'm over the moon that I won."