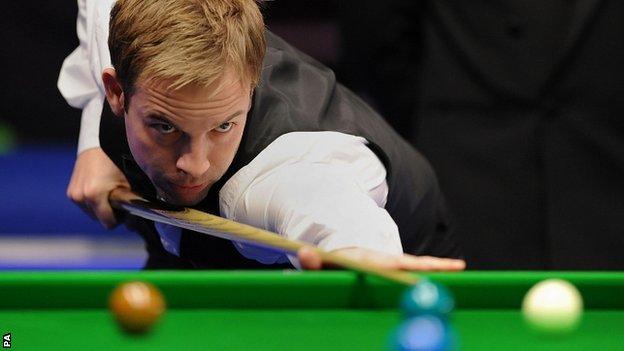 Ali Carter brought an end to Mark Joyce's campaign at the UK Championship with a 6-2 victory in the second round.

Joyce had beaten world number one Judd Trump in his opening match in York but found Carter, ranked 14th, too strong.

Welshman Matthew Stevens moved through to the quarter finals with a 6-4 victory against Hong Kong's Marco Fu.

Stevens will play John Higgins or Mark Davis in the last eight, while Carter takes on Stuart Bingham, who beat 2004 champion Stephen Maguire 6-4.

Carter, who suffers from Crohn's disease which causes inflammation of the bowel, said: "I'm looking forward to better days to come with my stomach but at the moment I can't seem to live normally and feel normal on a day-to-day basis.

"My stomach is on my mind all the time, even more than my snooker really.

"I haven't played any good yet, but it's not about playing any good, it's about winning."

"Hopefully it's not just because of my age. I don't know if I've had it. Maybe I'm finished."

Murphy, who won the UK title in 2008, added: "I didn't feel that match was vintage but I've had a change in my approach to snooker in the last few months and, but for a bit of bad luck, I've been playing pretty well so onward and upwards."