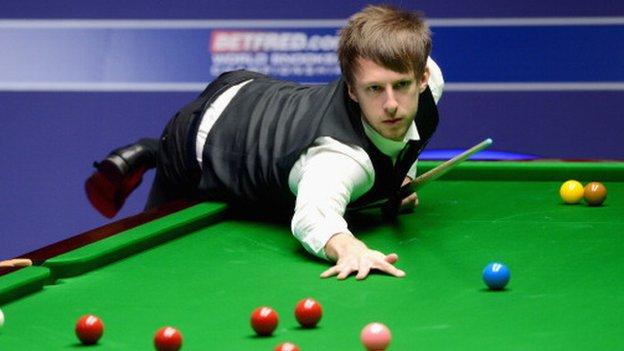 Snooker could learn from darts and be made more exciting for fans, according to world number two Judd Trump.

Trump saw the PDC World Championship at Alexandra Palace and feels snooker can adopt some of its razzmatazz.

He said: "The atmosphere and the crowds were really good. It was a bit rowdy for me but I think they need to certainly liven it up, especially between frames.

"The crowd should be allowed to chant perhaps, or get some music playing."

There have been previous attempts to rejuvenate the sport with eye-catching new forms of the game such as Power Snooker and the Shoot-Out that were enlivened with music and entertainment.

As snooker's Masters tournament begins at Alexandra Palace - managed by Barry Hearn, the man behind the PDC - 23-year-old Trump said he could see elements from darts competitions working in snooker.

He added: "When people are sat quietly for 20-25 minutes per frame, they should be allowed to let their hair down at the end of it."

However not all players are as enthusiastic for change as Trump.

John Higgins, who is bidding for his third Masters title, said: "I think it's pretty hard to bring the darts razzmatazz to snooker.

"At the darts there is maybe only a small percentage that are there to really watch the darts, and the rest of them are there to enjoy themselves.

"I wouldn't be averse to it but it's hard because they have finishes to legs every two or three minutes, when in snooker it can be every 20 minutes to get a frame."