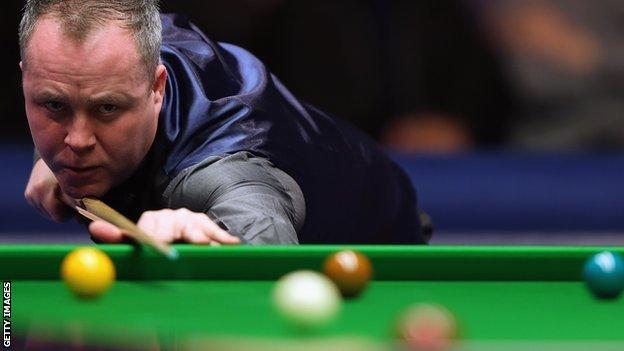 Two-time Masters champion John Higgins reached the quarter-finals of the 2013 tournament with a confident 6-3 victory over Ali Carter at Alexandra Palace.

Carter had gone 2-0 ahead, pinching frames that his opponent should have won but Higgins soon took control.

The Scot won four frames on the trot before Carter pulled one back to reduce the deficit to 4-3, but Higgins won the next two to go through.

Former world champion Dott took the first two frames, but Maguire responded in superb fashion, knocking in a 110 break before levelling the scores.

A break of 65 allowed Maguire to forge ahead in the match for the first time, but his opponent hit back by winning the next two for a 4-3 lead.

And despite still being able to win the next frame, Maguire conceded it in frustration to leave Dott one away from victory.

However, Maguire took the next two, including a 131 clearance, to force a decider and despite needing a couple of chances, Dott clinched a tense final frame to set up a meeting with either Judd Trump or Barry Hawkins in the quarter final.

Earlier, Higgins booked his place in the last eight of the competition with a comfortable victory over Carter.

"I was expecting Ali to make a comeback and there was a bit of pressure and nerves on the last clearance but I am pleased to get through," he told BBC Sport afterwards.

"Within myself, I knew I was hitting the ball OK at 2-0 down so that is half the battle won. It is only you and your mind out there. Playing with my new cue, it feels good.

"I am practising more now that I have a snooker table at home. This is a great event and it is so tough."

The winner in 1999 and 2006, Higgins is one of the favourites for the title seven years after his last triumph and will now face either Shaun Murphy or Ricky Walden in the quarter-final.

"This victory underlines why John Higgins has been such a tough match player down the years. He dominated the first two frames yet ended up losing both on the final black. But rather than become despondent as many a professional might have done, the frustration fired him up as a four frame burst helped to put paid to Ali Carter's challenge. Higgins has mental toughness in spades. The four times world champion is scoring heavily, and he's clearly a serious contender for what would be his third Masters title."

The world number three was cruising in the opening frame but missed a simple black. Carter came to the table 63 behind and a run of 64 gave him the lead.

Despite needing two snookers, the Englishman nicked the next as well.

But four-time world champion Higgins showed his class as a sublime total clearance of 117 followed by a 46 break restored parity.

It was soon three in a row for Higgins, as he left Carter scoreless in the fifth to go ahead in the match for the first time.

The Scot was beginning to dominate with the Essex man not having potted a ball for nearly an hour. A 97 break allowed Higgins to go two frames ahead.

In the seventh, Higgins was in among the balls but missed a red to the middle and Carter dug deep to amass 83 and go 4-3 behind.

Higgins ground out the eighth frame - the first scrappy one of the match - and Carter broke down in the next, leaving Higgins to score a composed 65 for victory.