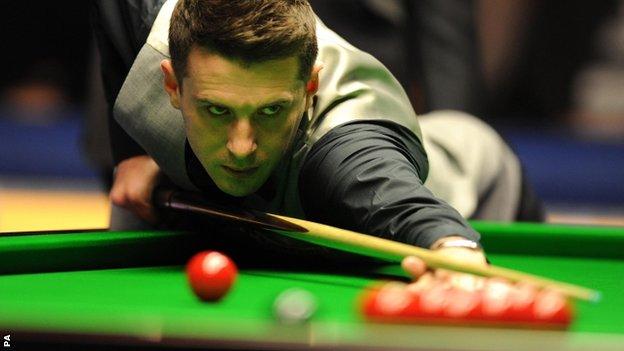 Mark Selby staged a remarkable comeback to beat Stuart Bingham and reach the quarter-finals of the Masters.

The world number one looked to be heading out after losing five frames in a row to trail 5-1 at Alexandra Palace.

But he battled back to force a decider and, after Bingham missed a crucial blue, Selby wrapped up a 6-5 win.

"Stevens has been guilty in the past of squandering large leads in big matches. He let slip a six-frame advantage in his World final against Williams in 2000, and once lost 13-12 to Shaun Murphy at the Crucible from 12-7 ahead. Perhaps that lack of a Stephen Hendry-style killer instinct explains why a player of his considerable talents has only one ranking title to his name."

Selby will meet Mark Williams, who earlier had completed a similar recovery, from 4-1 down, to beat fellow Welshman Matthew Stevens 6-4.

The world number seven, a two-time winner of the title, trailed Stevens 3-0 and 4-1 in an error-strewn contest.

Stevens, who wasted chances to go 4-0 and 5-1 up, gifted a struggling Williams two frames and the left-hander reeled off five in a row.

Williams, who won the Masters in 1998 and 2003, and Stevens - the champion in 2000 - both started nervously as they missed a series of chances in a scrappy opening frame lasting half an hour, before Stevens potted the final black.

Williams was first in with a break of 52 in the second but missed the last red and Stevens, ranked 15 in the world, cleared to the black to make it 2-0.

A run of 55 in the next extended his advantage before a crucial missed brown in the fourth allowed Williams to sneak the last frame before the interval.

"There are different types of competitiveness, and one of them is a killer instinct. Some players would never miss that brown Matthew missed to go 5-1 up. But sometimes you don't commit to a shot in the same way as you do to others. There are players who do not kill you off as well as others. It is the type of match that afterwards you want to to go back to your dressing room and smash your cue into a million pieces."

The 37-year-old took the frame on the black to get back to 4-2 and a run of 59 in the next reduced the deficit to one after another bad Stevens miss on the blue.

Williams was still prone to errors himself but took another tight frame on the colours to draw level, and a break of 68 in the ninth confirmed the sea-change in fortunes, before he wrapped up victory in some comfort in the next.

"I didn't play very well at all and neither did Matthew," said Williams. "He missed a sitter of a brown for 5-1 and I don't think I would have come back from that to be honest. But I was still trying and that is what got me through.

"It is easy to win when you're playing well but I was getting hammered out there and should really have been 4-0 and 5-1 down. I am over the moon I managed to stick in there and turn it around somehow."