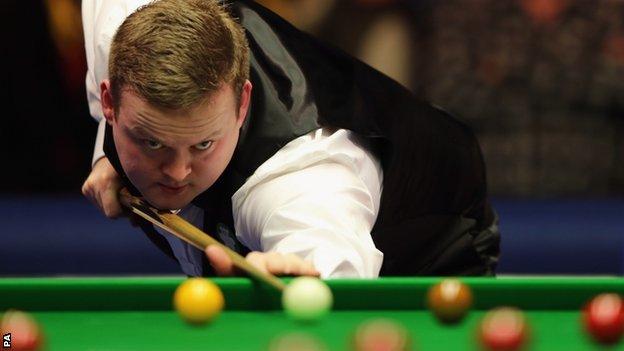 The pair shared the first four frames, as Allen knocked in a 138 clearance, but the Aussie then went 4-3 ahead.

The Northern Irishman struck 68 to level at 4-4 and Robertson's 101 put him one away. Allen forced a decider and he laid a snooker, but his opponent escaped, making a century for the win.

In the semi-final, Robertson will face Shaun Murphy who beat John Higgins 6-5.

Theirs was a captivating contest, even though neither player produced their best snooker.

"Neil Robertson described his pot on the red from Mark Allen's expertly laid snooker behind the yellow in the decider as one of the finest of his career. There were so many aspects that he had to get right; the correct pace, the right amount of spin, the angle to take the cue ball past the blue. He likened it to a clutch putt on a treacherous green. The defending champion executed it perfectly to launch the clinching century. A great shot worthy of winning a marvellous match."

Murphy now has the chance to become the eighth man to win the "triple crown" of World, UK and Masters Championships, but for Higgins it was a disappointing defeat having held a three-frame lead.

Murphy - the world number four - made a confident start, taking the opener with a knock of 85, although Higgins took the next three frames.

A break of 69 in the fifth allowed the Scot to extend his advantage, but Sale's Murphy was finally able to win another frame at one visit with a 70.

The following frame was a tense one with both players missing chances, and it was Murphy who took it on the pink to go 4-3 behind, as well as taking the next to level.

Higgins, number three in the world, clinched the ninth to go one away from victory. He had the opportunity to win the match but missed a red and Murphy took it to a decider, one which he won with a composed 66 to advance.

A tremendous battle between the two left-handers Robertson and Allen earlier on Thursday was packed with high-quality snooker, as four centuries and five breaks over 60 were compiled.

Robertson, 30, now has the chance of becoming only the fourth man to defend the Masters crown after Cliff Thorburn, Stephen Hendry and Paul Hunter.

But for Allen, whose 138 break is the highest of the tournament so far, it was a desperate defeat having competed valiantly from start to finish, not seeing himself more than one frame behind at any time.

He had gone 60 in front in the crucial 10th frame, missing a red to the centre pocket and Robertson had the chance to launch a counter-attack for victory but failed to capitalise.

Allen thought he gained the upper hand after playing a delicate snooker in the last, but saw Robertson escape with a pot on a red, before making 105 to triumph.

Robertson told BBC Sport: "It was fantastic quality throughout. There was some tension in a couple of the frames and I did not think it would get harder after playing Ding [Junhui] but over the moon to get through.

"You only want one chance in the final frame. I did try to pot the red [after the snooker] and I apologised to Mark after, it is a hard way for him to go out.

"You don't want to lose in the first round, which happened to me after winning the World Championship, and I have defended titles before which gives me belief that I can do it again."