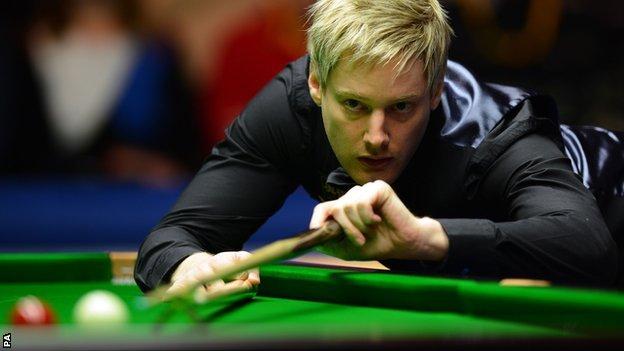 Breaks of 84 and a brilliant 133 put the Australian 3-1 in front, although Murphy could have been level, letting slip a 68-point lead in the fourth.

He reduced the arrears in the next, but Robertson made 85 and 127 as he went 5-2 up, and though Murphy had chances in the eighth, Robertson sealed the win.

He will play Mark Selby, who beat Graeme Dott 6-5, in Sunday's final.

"We both struggled out there, it was strange. I tried to focus but I couldn't. I did not feel comfortable at all, I just felt flat," Selby told BBC Sport.

"Hopefully, I can come back fresh tomorrow. It will be a tough game against Neil and I need to play 10 times better. If I do turn up and play, it will be a good match."

"A bitterly disappointed Shaun Murphy made far too many errors in attempting to deny Neil Robertson a shot at retaining his title. He gifted two frames to the defending champion at key times, when he had looked set to level at 2-2 and 3-3. He missed three shots with the rest, a tool he is usually so comfortable with, and simply didn't score heavily enough. Robertson made four breaks of over 70 including two centuries, Murphy's highest, just 48. The Melbourne left hander, though, is at the peak of his powers.

Dott won a tense opener after Selby missed the chance to steal the frame as he failed to pocket the black off the spot, but he soon levelled with a knock of 79.

Scotland's Dott then stroked in 111 and 75 on his way to a 4-1 lead, but he should have extended his advantage before missing the brown and the black, as Selby clinched the sixth.

It proved to be crucial as Selby - who won the UK Championship last month - took the following two lengthy frames to level but, despite needing a snooker in the ninth, Dott claimed the re-spotted black to go one away from victory.

A quick-fire 65 from the Leicester man took the epic tussle to a decider, one which he took to advance.

Earlier, Robertson said after his win: "To get to another final is an amazing feeling but I still have a lot of work to do. I will do what I have been doing all week and come back refreshed tomorrow.

"I have been pouncing on mistakes this week with big breaks and I can put that into my opponent's mind. You have to punish people.

"I have made a lot of centuries in my career, but my potting gets me out of trouble - I am trying hard not to do that now. I am nowhere near the finished article but I am getting there."

In a repeat of last year's final, Robertson produced a high-scoring display of snooker, and now has the chance to become only the fourth man to lift the title in successive years.

For Murphy, it was a case of missed opportunities, as he broke down in the 40s on several occasions, losing sizeable leads in the fourth and sixth frames.

His second century of the match, a 127 total clearance in the seventh frame, put Robertson on the verge of victory and he duly pinched the next to go through.