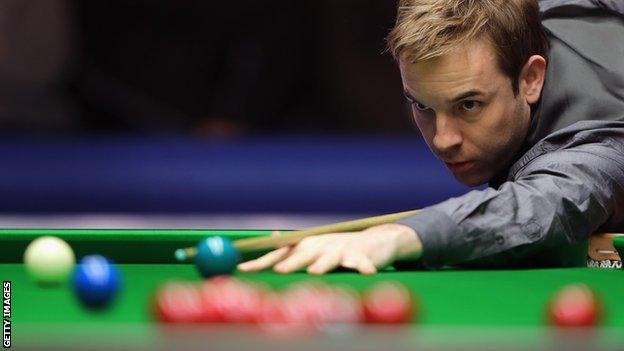 Ali Carter won the third ranking title of his career by beating Marco Fu 9-6 in the German Masters final in Berlin.

Hong Kong's Fu led 5-3 after the first session, agonisingly missing out on a maximum 147 by missing the 14th red.

The Englishman, 33, stroked in century breaks of 116 and 121 to level the encounter and the next two frames were shared to go 6-6.

It was all Carter from there on, compiling 71 on his way to taking the last three frames for victory.

After adding to his wins at the 2009 Welsh Open and 2010 Shanghai Masters, Carter said: "It was tough out there. Marco struggled a bit.

"We were both keen to put on a good show for the crowd, and I'm delighted to come out the winner at the end of the week.

"Things have turned around for me massively. I just give it my all, it is very satisfying to come out the winner here."

Fu, who was contesting his first major final since 2008, said: "Ali played very well tonight so all credit to him. I just didn't play very well tonight, and was faced with a lot of tough shots.

"It is nice to be in the final again. The crowd have been great this week. Hopefully, I can come back next year and win it."