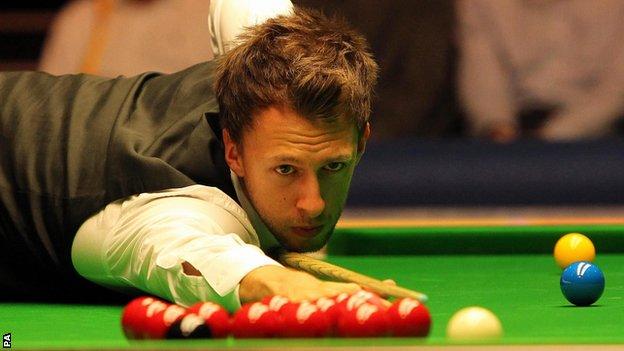 Pankaj Advani's historic run at the Welsh Open has come to an end at the quarter-final stage after a comprehensive defeat by Judd Trump.

Advani, 27, was beaten 5-2 by the world number two after becoming the first Indian to make the last eight of a world ranking tournament.

Trump, who has exited his last three major events before the last-16 stage, said: "My game is getting better.

"My safety was pretty good, but I still do not feel 100% among the balls."

Trump goes on to face Stephen Maguire in the last four after the Scot beat compatriot Alan McManus 5-3.

In the other half of the draw, reigning champion Ding Junhui thrashed Robert Milkins 5-1 to set up a semi-final against Stuart Bingham, who beat Ken Doherty 5-3.

Advani - who is an eight-time world billiards champion - set up his last-eight clash against Trump, 23, thanks to a landmark 4-1 victory against Graeme Dott on Thursday.

But he found the going tough against the Englishman, who looked on course for a whitewash as he raced into a 4-0 lead before Advani showed resolve to take the next two fames, including turning around a 59-1 deficit in the sixth.

Trump's class eventually showed, however, to put him on course for his first standout result since he took the International Championship in China in November.

"Going out early in the last few tournaments means I have had to do a lot of practice on my own, so it is nice to get some match practice," he told BBC Sport Wales. "It is pleasing that my safety is competing well against the top players because my scoring hasn't been that great this week.

"Normally near the end of a frame I go on to clear up but I am nowhere near as confident as I was before Christmas."