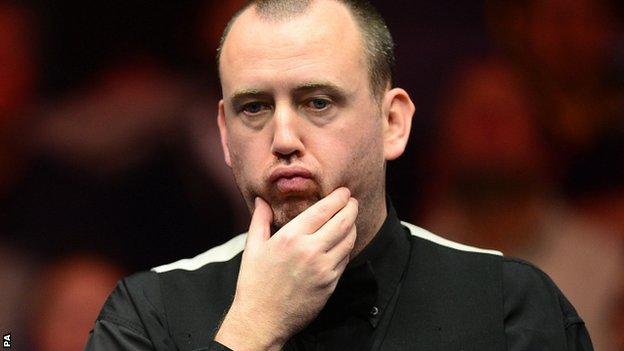 Mark Williams continued his run of poor form as he went out in the first round of the World Open in China at the hands of Hong Kong's Marco Fu.

The Welshman, 37, started the season ranked three in the world but has already slipped to number 10.

His 5-2 defeat by Fu was his third first-round loss in the past five ranking events, a run that has seen the left-hander win only two matches.

The 15-year-old lost the opening three frames as the reigning UK and Masters champion enjoyed breaks of 52, 48 and 69 but looked set to take the fourth after a 64, only for Selby to steal it with a 73 clearance before going on to wrap up a comfortable victory with further runs of 57 and 73.

He will play Barry Hawkins, his conqueror at last year's World Championship, in the second round. Hawkins made breaks of 60, 93 and 112 in beating Ian Burns 5-1.

The Hong Kong cueman trailed Williams 2-1 early on after an 86 break from the Welshman but edged two nervy frames either side of the interval to nudge ahead and stayed in control of a cagey encounter to wrap up victory.

Higgins came through 5-3 in a battle with fellow Scot Alan McManus and will play Stuart Bingham - a 5-2 winner over China's Zhao Xintong - in the second round.

Maguire also won 5-3 in another all-Scottish encounter with Marcus Campbell and will play Ricky Walden next.