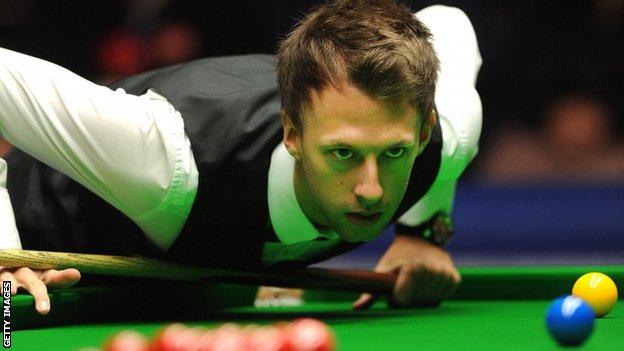 Judd Trump will face Matthew Stevens in the quarter-finals of the Haikou World Open after recording a 5-1 win over Nigel Bond.

"Considering the conditions are tough here and it's very hot it was one of the best games I have played," said Trump.

He will now play another Englishman Ricky Walden, who defeated Scot Stephen Maguire 5-4.

Stevens has been playing with a cue borrowed from fellow Welshman Mark Williams after his own went astray on the flight to China.

However, the former UK champion came through 5-3 against 2005 world champion Shaun Murphy, having been 3-1 down, to book his place in the next round.

"Hopefully my cue will arrive tonight," Stevens said. "I didn't expect to get this far so everything now is a bonus. Maybe I'll put my cue in the bin."

Meanwhile, world number two Mark Selby will take on Australian Neil Robertson for a place in the semi-finals.

Selby defeated fellow Englishman Barry Hawkins 5-1, while Robertson eased to a 5-0 victory over Scotland's Graeme Dott - the man he beat in the 2010 World Championship final.

Four-time world champion John Higgins cruised to a 5-0 win over Stuart Bingham, and will now face Ding Junhui who made a 127 on the way to securing a 5-2 victory over Hong Kong's Marco Fu.

"I'm looking forward to playing Ding in front of his home crowd because he's a hero here and it will be a good challenge. It's a very strong line-up," said Scot Higgins.