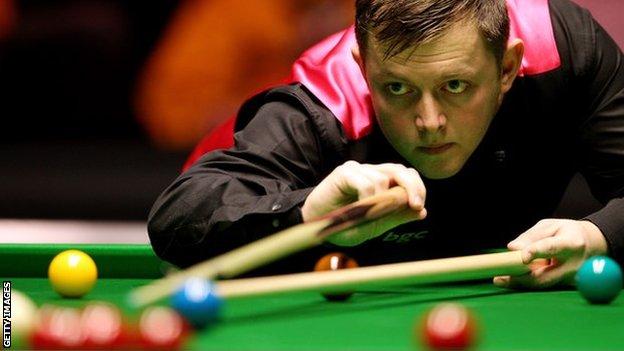 Northern Irishman Allen, 27, took early control of the final by winning the first four frames and always had at least a two-frame advantage.

Stevens made breaks of 112 and 100 but the Welshman was unsuccessful in his first ranking final since 2008.

"To win the same tournament two years in a row is a great achievement and I'm happy to retain my title," said Allen.

Mark Allen's route to the title

"The snooker wasn't as good as I had hoped. I didn't get into a rhythm and I didn't score very heavily. The scoreline was flattering and it wasn't as one-sided as that.

"But the result is all that matters. My form has been good for the last few months so I'm relieved to finally get a win. Hopefully I can push on now and win more."

Stevens, 35, had beaten three of the top four players in the world - Judd Trump, Neil Robertson and Shaun Murphy - on his way to the final.

However, the victory against Murphy and an opening-round win over David Gilbert came with Stevens playing with borrowed cues after his luggage had been lost en route to China, before he was reunited with his cue for the quarter-final match with Trump.

But Allen, whose victory takes him up to seventh in the world rankings, won six of the next eight frames to successfully defend the title, which he had won in 2012 when he beat Stephen Lee 10-1.

"It wasn't a great match but Mark's safety was a lot better than mine and he did the job, so well done to him," said Stevens.

"It's always disappointing to lose in finals, but it's still been a good week for me."