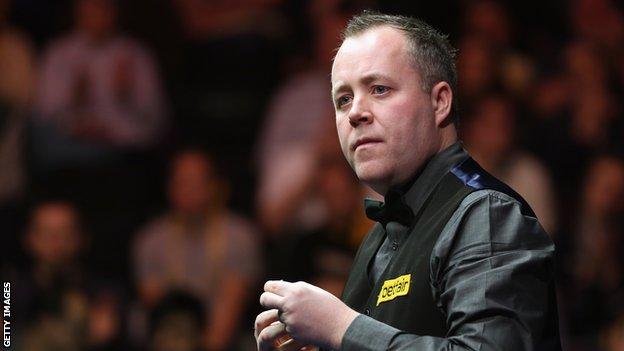 John Higgins and Judd Trump both suffered shock defeats in the first round of the China Open, the final event before the World Championship.

Four-time world champion Higgins led 3-1 and 4-3 against Robert Milkins but the world number 19 fought back to to take the last two frames for a 5-4 win.

World number one Trump was then beaten 5-3 by his good friend Jack Lisowski, the 21-year-old ranked 42 in the world.

It is the third time that Lisowksi has beaten Trump in their four meetings.

"It's not easy playing your friend, but we're still mates after the match," Lisowski said. "I didn't practise much with Judd before this tournament because we knew we'd probably end up playing each other. I played a bit with Liang Wenbo instead and that really helped me."

Trump added: "Jack played very well and made it hard for me. He only missed one long ball in the match. Playing like that I think he would have beaten anyone in this tournament."

Matthew Stevens became the third member of the top 10 to crash out after the Welshman succumbed 5-2 to Rory McLeod, the world number 40.

Ali Carter - battling with Mark Davis to secure the final place in the top 15 and avoid having to qualify for the Crucible, with defending champion Ronnie O'Sullivan returning to make up the top 16 - also progressed with a 5-2 victory over Chinese wildcard Zhao Xintong.

"I don't want to have to qualify for Sheffield and if I keep winning I won't have to," Carter said. "It would be nice to be there by right and I think I deserve to be there based on what I've done there and what I've achieved this season."

Scots Stephen Maguire and Graeme Dott both reached the second round on Monday.