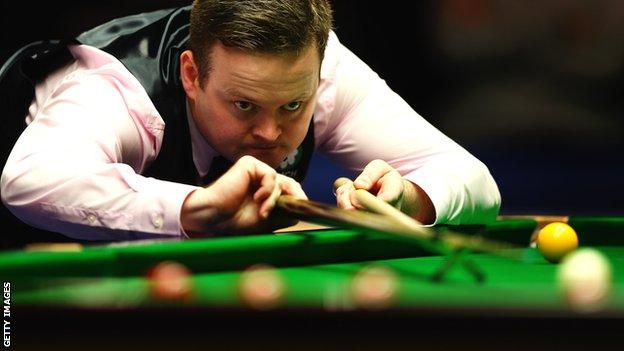 Former world champion Shaun Murphy recovered from a 4-2 deficit to beat Jack Lisowski 5-4 and claim a place in the Beijing China Open semi-finals.

Murphy, yet to win a title this season, progressed after breaks of 41 and 36 in the deciding frame.

He will play Masters champion Mark Selby in the last four, after he beat Mark Williams 5-1.

Neil Robertson beat Marcus Campbell 5-2 to set up a semi-final against Stephen Maguire.

Maguire was also a 5-1 winner against Barry Hawkins, who had stunned the Chinese crowds in the first round by knocking out Ding Junhui.

Left-hander Lisowski, who had already beaten world number one Judd Trump and Mark Davis. went ahead in an entertaining encounter with Murphy, courtesy of a 62 in the opening frame.

Murphy levelled with a high-class 137 and added the third on the final black.

Lisowksi, 21, recorded a 71 to square the match and then captured the first two frames after the interval.

But he was unable to take further opportunities as breaks of 40 and 48 helped Murphy level again, before he pulled away in the final frame.

"There's a fine line between winning and losing and I had a bit of luck at the right time," 30-year-old Murphy admitted.

"Jack is a player we're going to see a lot more of in the next 10 or 15 years - we have glimpsed the future this week. People better learn how to say his name properly because he's going to be around for a long time. He's very talented and confident and he plays an aggressive style of snooker."

Lisowski, who achieved a 147 in the UK Championship qualifying rounds last year, said: "I couldn't quite do it from 4-2 up but there are a lot of positives from this week. I've had a lot of fun, really enjoyed playing and seeing Beijing. I will learn a lot from this week and I am slowly progressing."

Selby won a scrappy opening frame on the colours before 2010 champion Williams levelled the match with a run of 54.

Having taken the third frame, Selby secured a two-frame advantage with a clearance of 64.

The fifth was another tense affair that went to Selby but he wrapped up the match in assured fashion with a 72.

"It was quite similar to yesterday, I didn't play fantastic [against Ricky Walden]," Selby said. "Mark had a lot of chances but he missed too many balls.

"He kept giving me chances and I managed to take them in the end.

"As long as I keep winning then I have the chance to play better, and I'm only two matches away now from winning the title. I feel relaxed and I'm enjoying playing."