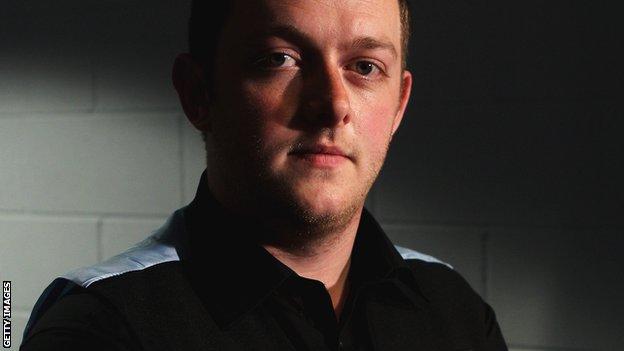 A wee smile plays at one corner of Mark Allen's mouth almost throughout our 45-minute chat. The smile of someone who wants to say more but is aware of the consequences should he do so: the fines, the public reprimands, the tut-tutting of traditionalists who remember when snooker was a gentleman's game.

There might be no better example of the sanitisation of modern sport than Allen, not to mention the hypocrisy that exists within and around it: people moan there are "no characters in snooker any more" yet every time the Northern Irishman says anything vaguely controversial he's told to shut his expansive trap.

I wonder how some of these ex-players ever won tournaments, the way they talk about the game. If they went in with modern players they'd get battered

"I've got that wee voice in the back of my mind, trying to shut me up," Allen, among the favourites for this year's World Championship that starts on Saturday, tells BBC Sport. "Snooker is very censored and that's terrible for the game. I can't see how it can go forward if everything is being stifled."

Allen's litany of misdemeanours includes swearing at a media conference, during which he called for World Snooker chairman Barry Hearn to resign; criticising China during the 2012 World Open in Haikou, an event he won; and accusing Chinese players of dishonesty at the Crucible last year.

He got an £11,000 fine for that last one, despite the fact BBC commentator Terry Griffiths thought Cao Yupeng, who beat Allen in the first round, perhaps should have declared a foul on himself that was missed by the referee.

Allen is unrepentant, including about the China stuff. However, not wanting to get the young man into trouble again - he's getting married next month, he could do without another fine - it's perhaps best I don't go into too much detail.

"I paid close to £20,000 in fines last year," says the 27-year-old, whom I caught up with at Crondon Park golf club in Essex, where one of the more fringe events on Hearn's expanded tour was taking place.

"It's hard when you get beaten and they stick you in front of a microphone. I'm capable of saying anything but I was made a bit of a scapegoat by World Snooker.

"Backstage, a lot of my views are shared by other players. Unfortunately, there are just so many players in the game who are scared of saying anything."

Allen also claims his various spats with fellow players have been blown out of proportion, not only by written journalists but by former players-turned commentators whom he thinks have lost touch with the game.

"A lot of the commentators are uneducated," says Allen. "Even when I was winning the tournament in China [Allen retained his World Open title in March] somehow they managed to bring up the Stuart Bingham thing.

"There's no beef with Stuart Bingham. I said he had no bottle, he proved me wrong by winning a couple of tournaments, and we've had drinks and dinner together since.

"Sometimes I wonder how some of these ex-players ever won tournaments, the way they talk about the game. They're stuck in their ways but the game's moved on. If they went in with modern players they'd get battered."

It's talk like this that makes me warm to Allen. More so when he reveals that not every shot a player misses is down to a kick, as some commentators would have us believe.

"It's probably hardly ever a kick!" says Allen, laughing. "I don't know why they say it, I think it's just become a habit. Sometimes we just miss a pot because it was a bad shot."

While Allen is adamant his relations with fellow players are for the most part cordial, he also says too many players get on too well. "There are too many nice people in snooker, I don't think there's any place for it," says the world number six, who admits he becomes more focused when his contests have an edge and there is no friendship involved.

"Look at boxing, you have all this banter between the fighters in the build-up and that's what people enjoy. You can't get any of that in snooker. It's sold as a 'proper' game, but it hasn't got 'proper' people in it. The players are down-to-earth people, from council estates, much like the people watching it."

Allen concedes Hearn, who took over the reins of the sport in 2010 and has turned snooker players from part-timers into full-time professionals on a choc-a-bloc tour, has improved the sport. But - and this won't surprise you - Allen also believes Hearn has gone too far.

For a start, Hearn's expanded tour - next season consisting of 27 events spanning 50 weeks of the year - means Allen will spend a lot more time in places like Crondon Park, scrapping for small purses in empty halls in order to maintain or improve his ranking.

From next season, all 128 professionals will play from round one in eight of 11 ranking events, meaning the world's top 16 players will no longer be guaranteed a place in the more lucrative latter stages.

"I've worked hard to get where I am," says Allen. "And a lot of other players have been in the top 16 for 15 to 20 years and now they're going to have to start in round one playing in front of no-one, guaranteed no money.

"The top players deserve a bit of security and we don't get this under the new system."

"Whether they like it or not," Hearn says, "the players are going to be taken to the Promised Land because Moses is driving the flock forward at ever-increasing speed."

Allen replies: "Everything's a joke to Barry because it can be - he owns 51% of the company."

You can imagine Hearn reading this in the office of his Essex pile and chuckling away contentedly: "If Allen has got the hump, I must have got it right." Then again, he's probably too busy, chiselling out some new commandments for his flock.

While Hearn points to the expansion of the tour as definitive proof of progress, Allen believes the increased prize money is offset by the increased travel costs involved, especially now there are five ranking events in China.

"It's nice to be able to do what you love for a living," says Allen, "but I have no security whatsoever. If I'd have lost in the first round in China, I would have probably been struggling to pay my bills, and I'm the world number six. The expenses have probably tripled or quadrupled since Barry took over.

"Too much emphasis is being put on China. Considering how unstable China can be, if they pull their sponsorship, the game of snooker will be dead.

"Snooker in the UK is dying a death at grass-roots level. Clubs are closing down all over the place and there's not the same talent coming up because there aren't as many people playing the game."

For a man who says he has to be careful what he says, Allen says an awful lot: if you were to take Allen out of the equation, you'd be left with an awful lot of players who say almost nothing.

I ask Allen if he is looking forward to his wedding and there's that wee smile again. "That's one of the only good things about being away so much," he says, "I don't have to worry about it."

I should point out to the future Mrs Allen that he was only joking. We can't have him getting into trouble again.