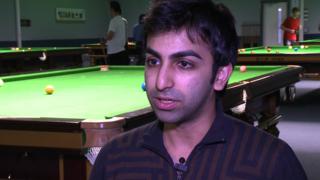 Indian snooker player Pankaj Advani is bidding to become only the second Indian to play at the World Snooker Championship at the Crucible Theatre.

The eight-time world billiards champion needs to win four matches at the English Institute of Sport in Sheffield this week to qualify and he tells BBC Sport about the challenge of moving to England to chase his dream.

Advani, 27, became the first Indian to reach the quarter-finals of a world ranking event when he beat three former world champions in Peter Ebdon, Shaun Murphy and Graeme Dott at the Welsh Open in February and he says his form shows these are "exciting times for Indian snooker".

There is a second Indian taking part in qualifying, Aditiya Mehta, and the pair are looking to emulate fellow countryman Surinder Gill, who lost 10-1 to Stephen Hendry, in the first round of the World Championships in 1994.