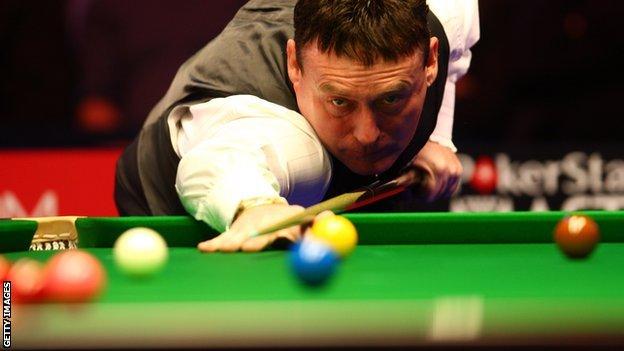 Jimmy White has won his first qualifying match as he bids to reach the main stages of the 2013 World Snooker Championship.

White, 50, beat China's Tian Pengfei 10-7 at the English Institute of Sport in Sheffield on Monday.

The six-time World Championship runner-up will meet China's Xiao Guodong in the next qualifying round on Wednesday.

White would then have to beat Robert Milkins, 37, to qualify for the main event at the Crucible in Sheffield.

Trailing 5-4 at the end of the first session, White, ranked 57th in the world, won six of the next eight frames to seal victory against his 25-year-old opponent.

White now plays 24-year-old Xiao, the world number 38, with the winner going on to face Milkins, who is ranked 19th in the world.

Wattana, 43, a former world number three who reached the Crucible semi-finals in 1993 and 1997, will next play the emerging Jack Lisowski.

Pankaj Advani, who became the first Indian player to reach the quarter-final of a ranking event at February's Welsh Open, fell at the first qualifying hurdle on Sunday, beaten 10-8 by two-time Crucible semi-finalist Joe Swail.

Luca Brecel, the 18-year-old Belgian who became the youngest player - at 17 - to qualify for the World Championship last year, lost 10-6 to Glaswegian Fraser Patrick.

The qualifying phase lasts until Sunday, 14 April, before the main World Championship begins on Saturday, 20 April.