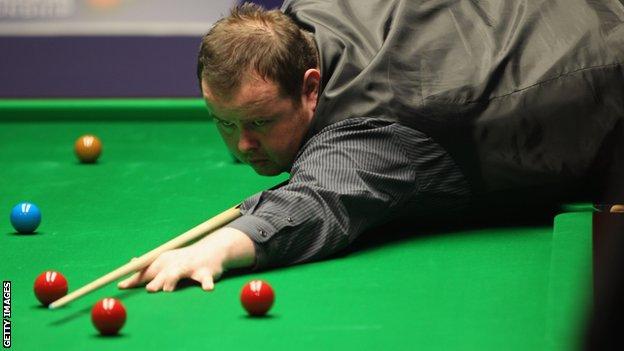 An investigation into a match involving Stephen Lee has been dropped but snooker authorities are pursuing other corruption allegations against the suspended player.

Lee has been banned since October 2012 while the World Professional Billiards and Snooker Association (WPBSA) investigated a Premier League match against John Higgins.

A spokesman confirmed it would not now be proceeding with that case. But Lee still faces a match-fixing investigation into eight other matches.

His suspension means the 38-year-old, from Trowbridge, Wiltshire, will miss the World Snooker Championship at the Crucible, which starts on 20 April.

The player, who was ranked eighth in the world at the time of his suspension, is currently in China and unavailable for comment, although he strongly denies any wrongdoing.

He faces an independent Sports Resolutions UK hearing, which is unlikely to take place before June, over the allegations.

Snooker officials believe the separate Higgins case would have been prejudiced by the main inquiry - whatever the result - so have decided to concentrate on that hearing.

One of the games in which Lee is accused of breaching rules took place at the 2009 World Championship.

He faces further claims involving four matches at the 2008 Malta Cup, two games at the UK Championship that year and one match at the 2009 China Open.

Lee is alleged to have provided information "that is not publicly available" and deliberately influenced "the outcome or conduct of a game or frame".

If found guilty of breaching snooker's rules in any of the eight matches under investigation, he is likely to be given a lengthy ban.