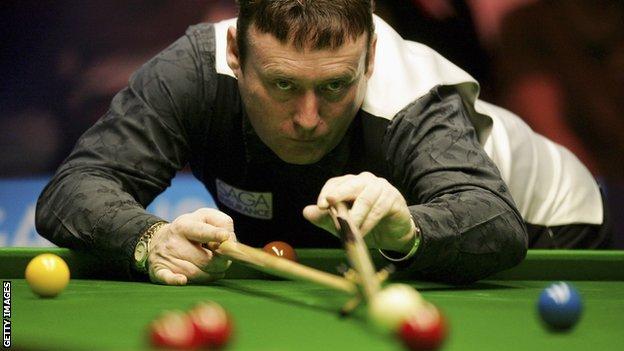 Jimmy White - the six-time World Championship runner-up - reached the final round of qualifying for the Crucible with a 10-4 victory over China's Xiao Guodong.

White, 50, last played at the Sheffield venue in 2006 and needs to beat Robert Milkins on Sunday to advance.

Having gone 6-3 up after the first session, 'The Whirlwind' took the four frames he needed for victory.

Six-time champion Steve Davis is out after losing 10-7 against Kurt Maflin.

Davis went 5-4 down against the Norwegian and was unable to overturn the deficit, missing out on a clash against veteran Peter Ebdon in the last round of qualifying - Maflin finishing the match with a century break.

Young Englishman Jack Lisowski, who reached the quarter-final of the China Open in March, also advanced after a 10-4 win against two-time World semi-finalist James Wattana and will face Ireland's Fergal O'Brien for a place at the main event.

The draw for the World Championship takes place on 15 April, with the event getting under way on 20 April.