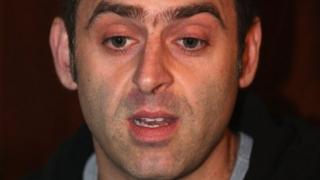 Ronnie O'Sullivan says returning to the Crucible to defend his World Championship title next week could be like watching "car crash television".

O'Sullivan has not played in a major event since winning last year's title, but the four-time winner believes he is still a "match for anyone".

The 37-year-old will play Marcus Campbell in the first match at the Crucible on Saturday, 20 April.