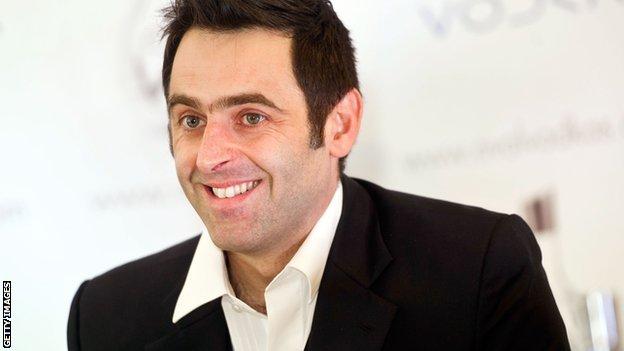 Running has kept Ronnie O'Sullivan's feet firmly on the ground in recent years.

The reigning world snooker champion, who recently announced the end of his self-imposed exile from the sport, describes it as an "anchor" in his life.

The whole point of getting out running is to hear the birds, to hear your feet hitting the ground, to hear that rhythm, that tempo

"I do have that tendency to pursue things in an intense type of way, so to find something that was good for me to pursue was obviously a good thing for my mental make-up," he said.

"It would have been easy to go down the route of clubs, cars... but, when I did go through a phase of doing that, it never sat right with me. I was never comfortable with that life.

"To find running - and to find that community spirit that I got from running - fitted into my true values and beliefs in life."

During my six years on the snooker circuit, we have shared a few early-morning runs, at snooker tournaments in Telford, Glasgow and Newport.

But, like the rest of the snooker fraternity, I had not seen him for the best part of a year, ever since he announced he was taking a sabbatical from the sport after winning his fourth world title last year.

When he agreed to do an interview for BBC Radio 5 live ahead of this year's World Championship, which starts this weekend, I was delighted, even more so when he suggested we begin the day with a run.

After an early start and a seemingly endless trip across London on the Underground, I arrived in Essex at 7.30am.

I rang the doorbell of a beautiful, old, white cottage and waited for him to appear. When he did, he was on good form but tired, having driven back from a practice session in Sheffield the night before.

An hour later and, having digested some tea and toast, we drove to a forest 10 minutes from his house, ready for a 40-minute run.

Running has, as Ronnie himself admitted, been the making and saving of him at times and I got the feeling he has done as much thinking as running here in these woods in recent years.

"It's been a good anchor for me and a good addiction in some sort of way," he said.

It has not always been a firm grounding for the 37-year-old Englishman, the winner of four world titles and still regarded by some as the saviour of snooker.

Last June, he broke a bone in his foot in this forest while attempting to avoid a dog that had suddenly and unexpectedly crossed his path.

Despite three months in plaster, he had lost none of his speed and seemed in good shape, both physically and mentally.

When he is out among the trees and birds here in leafy Essex, he allows no distractions. The modern trend of running with music? Forget it.

"I tried it one day with the headphones on," he explained. "I couldn't get the right song on and I just remember pulling the headphones out of the iPod and slinging them into the bushes. That was it, never again.

"The whole point of getting out running is to hear the birds, to hear your feet hitting the ground, to hear that rhythm, that tempo. It was very therapeutic for me."

Like most club runners of 25 years or more, I can usually tell whether someone has been into the sport a long time. There is something natural about the way they move and accelerate.

Ronnie would admit he does not quite have that - he is not a natural-looking runner - but his speed is deceptive. His short stride carries him along at a really good pace.

During our run, we talked about many things, including the possibility of him running a marathon one day.

"You don't know what's round the corner, but I am a keen runner," said Ronnie, who has never run more than a half-marathon.

"It's something I will do until I die. I'd like to run a marathon when I'm in my 40s, but that depends whether I am still playing competitive snooker."

For now, the focus is a 17-day marathon on the green baize, one which begins in earnest against Scotland's Marcus Campbell on Saturday.