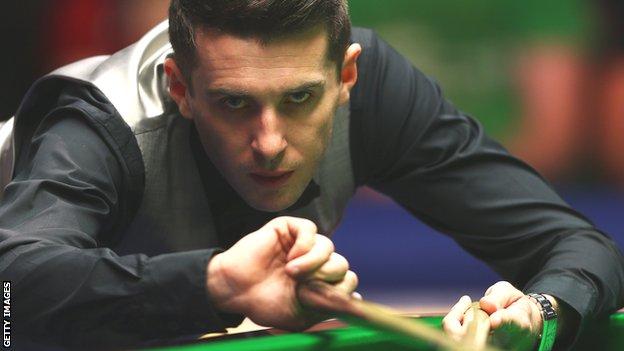 Mark Selby insists he feels no extra pressure to complete snooker's 'Triple Crown' in the same season by winning the World Championship.

The world number one could become the fourth player to win the UK, Masters and world titles in the same campaign.

"I need no more inspiration than trying to be world champion; it's irrelevant I am UK and Masters champion," he said.

"At the same time it'll be in the back of my mind, but not to the point where I put too much pressure on myself."

While seven players have won all three of snooker's major tournaments in their careers, only Steve Davis, Stephen Hendry (twice) and Mark Williams have won them in the same season.

Selby, 29, is chasing his fifth title of the season, having won two European Tour events as well as the UK and the Masters, and returned to the number one spot after reaching the final of the China Open.

When he reached the 2007 Crucible final, where he lost to John Higgins, it appeared only a matter of time before Selby was crowned world champion.

He admits Ronnie O'Sullivan's return may assist his own efforts in diverting attention elsewhere.

"Mark Selby did not play well to win the UK and the Masters, by his own high standards. He won through sheer determination and application because when Selby is flowing, he does not miss a ball. If he is on top form, he will be up there. Neil Robertson is my favourite for the tournament. He is an exceptional match player, his all-round game is phenomenal, his long potting is great, and he has a great attitude. If Robertson comes through his section, he might just do it again. Judd Trump has not pushed on from last year and I don't know whether he is applying himself properly off the table. He might think the game is easier than it is. Is he capable of winning it? Yes he is. Is he applying himself and practising? I don't know."

"In a way it probably helps," he told BBC Sport. "Everyone knows how big a draw Ronnie is and when he announced he was going to play, everyone knew the story would be about him.

"He is one of the greatest players to play our sport, so has every right for it to be about him. I think it is great he is trying to defend his title. It would have been a shame if he didn't play."

Selby opens his campaign on Tuesday against world number 45 Matthew Selt, one of six Crucible debutants in the tournament.

Lisowski, from Gloucestershire but now based in Romford where he shared a flat with Judd Trump until recently, beat Trump and world number 16 Mark Davis on his way to a first ranking quarter-final in China last month.

"I know I can give anyone a game if I play well," said Lisowski, who plays world number 14 Barry Hawkins. "I'll be the quickest player there and hope people enjoy watching me play."

White, from Neath, will face fellow Welshman Mark Williams, the two-time Crucible champion, in his first taste of the Sheffield arena.

"I have been playing this well since I was 17 but now I am showing it on the match table," he said. "That's four venues I have got to this season, and this one will be very exciting."

Sam Baird, a 24-year-old from Cullompton in Devon, is the lowest-ranked player - at 83 - in the tournament, but won four matches in qualifying including a 10-3 thrashing of former Crucible semi-finalist Joe Perry in the final round.

Poomjaeng, ranked 70, is based at the Star Academy in Sheffield and shares a house with four other Thai players inside the world's top 100, including former world number three James Wattana.

One veteran returning to the Crucible for a 22nd straight year is 2002 world champion Peter Ebdon.

The 42-year-old equals Steve Davis's mark and hopes to go on and break Stephen Hendry's record of 27 consecutive appearances.

"I'm very, very proud to equal my idol in the game, a six-time world champion," said Ebdon, who plays Graeme Dott - in a repeat of the 2006 final - in the first round on Sunday.

"It means the world to me. Probably more, in a strange way, than winning the World Championship. It's probably my most outstanding achievement in the game."