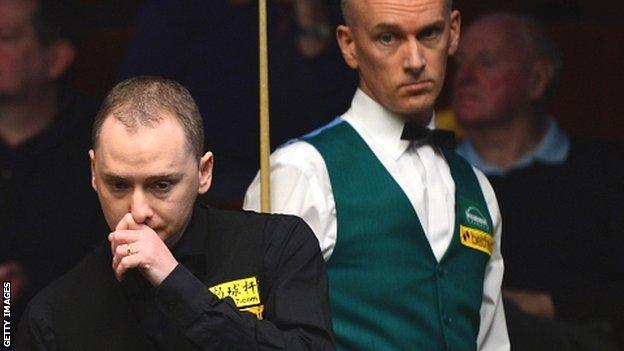 Graeme Dott beat Peter Ebdon 10-6 in the first round of the World Championship - a match that took over seven hours to complete.

The doughty Scot resumed at 8-6 up on the first available table once Monday's evening matches had concluded.

Officials called a halt to their morning session and the players came back in the evening, with Dott winning the two frames he needed to advance.

Ebdon, whose highest break was 39, showed his trademark battling qualities to edge the first four frames before a brave clearance saw 2006 champion Dott take the 13th on the black, and a run of 50 saw him move two clear before play ended ahead of the afternoon matches.

But a late-night finish to proceedings was avoided, as the players came back for the extra session, with Dott taking the 15th and 16th frames, including a century, to go through. The Scot will face 2005 champion Shaun Murphy in the second round.