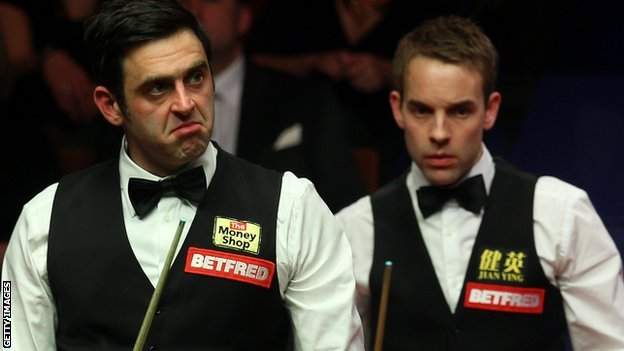 Two-time finalist Ali Carter says World Championship second-round opponent Ronnie O'Sullivan is "probably fresher" than anyone else in the draw.

O'Sullivan has played only one competitive match since beating Carter to win his fourth world title last May.

"I am not buying into the fact he has not played a competitive match because he is probably fresher than all of us put together," said 34-year-old Carter.

"Rest assured he has been practising very hard for this tournament."

"The normally affable Carter was reluctant to discuss his showdown with O'Sullivan, monosyllabic in fact.

"It felt as though he is trying to make the encounter feel as mundane as possible, perhaps part of his strategy to try and get the better of the defending champion, to whom he has lost in two world finals and has never beaten in a meaningful match.

"No doubt he'll be bending the ear of friend and sometime mentor Peter Ebdon in the coming days. Unlike Carter, Ebdon knows what it takes to topple the Rocket - he's done it here twice."

Carter, who beat qualifier Ben Woollaston 10-4 in his opening encounter, added: "If you are a marathon runner and hadn't done an ounce of training and turn up at the London Marathon, then won it, I would say that was pretty good.

"But if someone has been doing all the training before, just because they have people running next to them does that make any difference? Not in my book."

Carter has lost all 12 of his previous encounters with fellow Essex cueman O'Sullivan, including an 18-11 defeat in last year's final, but the world number 15 refused to be downbeat ahead of Saturday's encounter.

"It's just a second-round match," he added. "I have played him twice in the final so being in the second round will not match up to playing him in the final.

"Once we break off it's just a game of snooker but it will create a lot of media attention. It's a good match to be involved in.

"He has played out of [his] skin against me most of the time. I have played him in a lot of high-profile, important matches and he has never thrown in a bad performance.

Ali Carter has failed to beat the reigning world champion in 12 games at ranking events - including three times at the Crucible.

"We have practised together over the years and he knows how good I am so he will treat me with respect.

"I consider myself a little bit unfortunate arguably facing one of the greatest players of all time in two world finals.

"He was unbelievably good last year so that creates a problem for you to be good. His safety was spot on, he was scoring and he was making everything look ridiculously easy, as we know he does."

Carter had looked in a little bit of trouble at 3-1 down against Woollaston but the 25-year-old was unable to maintain his good early form and missed a series of relatively simple pots.