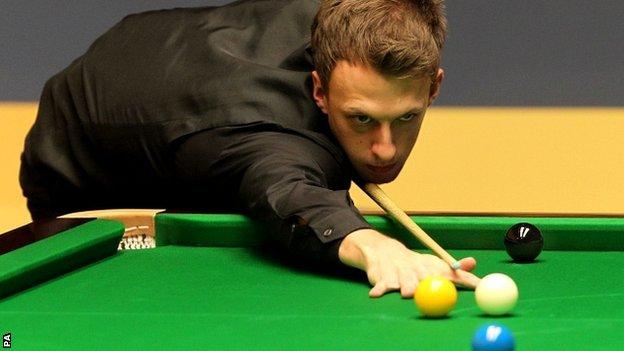 Judd Trump picked up where he left off on Tuesday to beat Dominic Dale and reach round two of the World Championship in Sheffield.

He faces Marco Fu in the last 16, after the Hong Kong man survived a comeback to defeat Matthew Stevens 10-7.

I feel at home out there on the big stage

China's Ding Junhui beat Alan McManus of Scotland 10-5 in the other match in Wednesday's morning session.

Ding had led 7-2 overnight and withstood a fightback from the 42-year-old McManus, who won the first three frames on Wednesday, to set up a match against England's Mark King in round two.

Dale looked like he might push Trump closer when he won Wednesday's opening frame to cut the deficit to 6-4, but the Welshman then saw the next three frames slip away and with them his realistic hopes of winning.

The consolation of a 147 break and £35,000 cheque beckoned in frame 14 as Dale reached 96 with 12 reds and blacks, only to rattle a long red around the jaws of the yellow pocket.

"It was a tough game at the start and we didn't play too great in the first four frames but after that I stepped up the pace," Trump told BBC Radio Bristol.

"I made a few big breaks and my safety started to get a bit better. I felt relaxed."

He added: "I've had a lot of support over the last couple of days so it's pleasing when people stick by you, even when you're not playing that well. I think people know what I'm capable of and if I get my potting right at this tournament then I'll have a good chance.

"I feel at home out there on the big stage. In a couple of tournaments, when the crowd's not as big, it's a bit disheartening.

"When you come here in the World Championship in front of a packed crowd then you've got to bring your best stuff."

Fu and Stevens met at the same stage of the competition last year, with Welshman Stevens emerging victorious on that occasion.

But Fu got his revenge this time, beating the two-time finalist, and reaches the second round for the first time since 2009.

Meanwhile, 2010 champion Neil Robertson leads Robert Milkins 5-4 after the first session, with the Aussie stroking in a 143 break in the process.