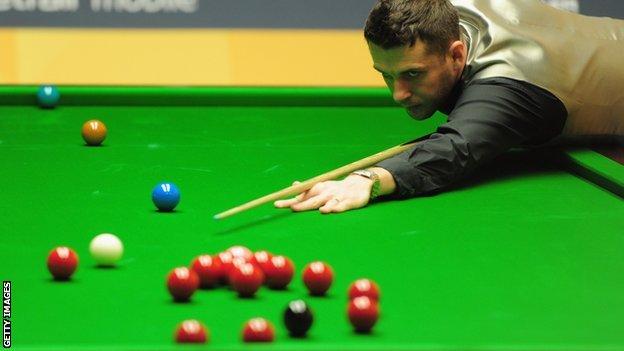 World number one Mark Selby defeated qualifier Matthew Selt 10-4 in the first round of the World Championship at the Crucible.

Selby is looking to become only the fourth player to win the UK, Masters and world titles in the same campaign.

The Leicester man surged 5-0 ahead, before Selt took three frames in a row.

But three of his own got Selby back on track, before a break of 91 in the 14th frame booked him a second-round meeting with Kent's Barry Hawkins.

The two players met last year, when Hawkins won 10-3 in the first round, although Selby had been troubled by a neck injury on that occasion.

Not vintage Selby by any stretch, but one of his great assets is his ability to win without ever approaching top form. He's won tournaments, never mind matches, in second gear, this season's UK and Masters titles being cases in point. He can scrap it out when the going gets tough and score heavily when the opportunity arises, hence a record 55 centuries last season. No wonder the world number one is considered among the favourites to lift the world title and so complete snooker's fabled "triple crown".

Having returned to top spot in the world during the China Open - where he lost in the final to Neil Robertson - Selby conceded he has placed a great burden on himself to win the title, having not produced his best snooker so far.

"A lot of the pressure I put on myself," he said. "Winning the World Championship is a big ask. It is in the back of my mind but not to the point where I'm letting it affect me.

"I've won tournaments with my B game in the past but I don't think that's possible at the World Championship. It's such a long tournament and you need to have sessions where you go up another gear."

Despite going out, Selt felt positive and enjoyed his debut in Sheffield.

"It's given me a great buzz. Losing 10-4 suggests I maybe got bashed, but I'm looking forward to next season," he said.

World runner-up in 2007 when he lost to John Higgins, Selby is looking to emulate Steve Davis, Stephen Hendry (twice) and Mark Williams as men who have won the 'Triple Crown' in the same season.

Since that defeat by Higgins, he has lost twice in the quarter-finals and once in a semi-final.

After Selt took the first frame of the final session with a break of 63, Selby responded with runs of 71, 51 and 55 to leave him one away from victory.

And he took it in style after the mid-session interval, despite missing out on a century, to advance to round two.