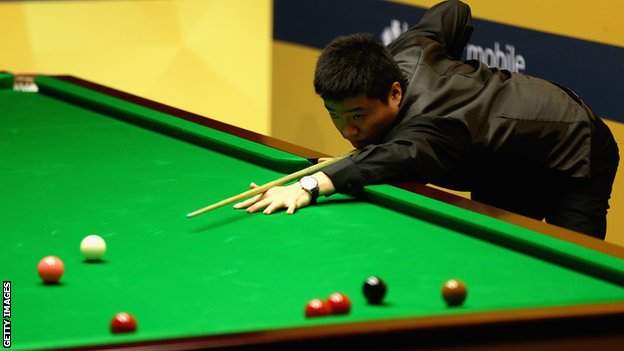 China's number one Ding Junhui beat Mark King 13-9 to reach the last eight at the World Championship in Sheffield.

King looked confident in the first session at the Crucible, opening up a 6-2 lead, but Ding responded superbly to take eight of the next nine frames.

England's King battled back to 9-10 before Ding stepped up a gear to win the three frames he needed for victory.

Having finished their first session 6-2 down, despite a pair of century breaks, Ding dominated the second session with breaks of 59, 98 and 74 to hold a two-frame lead.

The world number nine went further ahead in the final session with a 103, before King pulled two frames back.

Players are English unless stated

Ding took the 20th with another ton, and won the next too, before wrapping up a victory which sets up a last-eight clash against Barry Hawkins.

In a closely fought all-English contest lacking in real quality, Bingham and Davis were level at 10-10 before the former's 111 break paved the way for him to win three successive frames.

Bingham, from Basildon in Essex, reaches the quarter-final stage for the first time in seven attempts. The 36-year-old will next face defending champion Ronnie O'Sullivan, who wrapped up a comfortable 13-8 win over Ali Carter.

"It was a tough couple of days. A long, hard battle," said Bingham. "I played well in bits but poor in others. I just couldn't pull away from Mark.

"This is my 29th event of the season and I love playing the game. Other people may feel burnout, but you have to get on with it. I feel good."

Davis added: "Stuart deserves to win because he played a million times better than me, but I am struggling to work out how I won 10 frames.

"It just didn't happen for me, I wasn't hitting the ball well and it is very disappointing."

Ding has long been tipped to become a world champion but a semi-final in 2011, in which he lost 17-15 to Judd Trump, remains his best effort at the Crucible.

But with contenders such as Mark Selby and Neil Robertson already out of the tournament, the winner of six ranking events is beginning to show his top form.

Ding, who has stroked in six centuries in his opening two matches, said: "I think I will be better in the next round but I am happy with how I have played. I feel strong and I want to win.

"There is not much pressure to win because I am enjoying the game."

Defeat in Sheffield is a familiar feeling for King, who in 14 Crucible appearances has yet to get past the second round.

"The first session I was hitting the ball really well, I had some form but Ding played awesome in the second," he said.

"He was on a different planet. When he is hitting it like that, no-one can come close to him, not even Ronnie. He is a gentleman and I enjoyed the match."

You can follow all of the quarter-final action on BBC Two, the BBC HD Channel and online from 10:00 BST on Tuesday