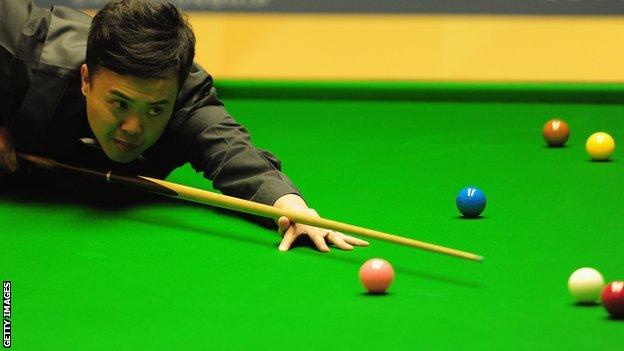 Fu took the next three and led 7-4 after hitting 70 in frame 11 but home favourite Robertson again responded, taking the next two to make it 7-6.

However, Fu kept his nerve to win his second career ranking event.

"I had a good season last year and played some good snooker, but it was frustrating not to win a title," said Fu.

"Neil and I played the best snooker throughout the week, although today it didn't really happen for us. We both got a bit tired towards the end, and twitchy here and there."

Robertson, who fails to become the first player in 10 years to win back-to-back ranking titles in the same season, added: "I'm very pleased to have got to the final, but the semi-final against Mark Selby which finished last night took a lot out of me and I didn't really get going today.

"Every credit to Marco for the way he played, his safety was brilliant and he didn't allow me to get any flow going.

"I kept a positive frame of mind tonight but I was always playing catch-up. Marco has been the best player this week and deserved to win today."