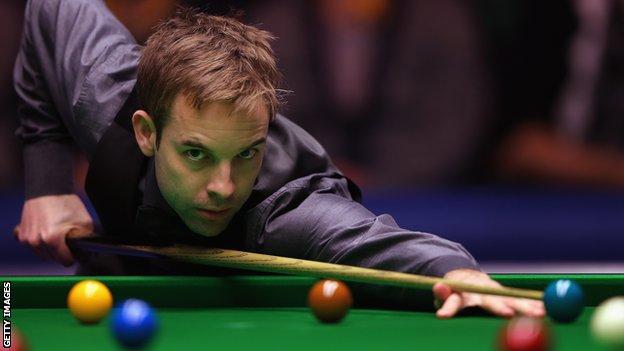 Two-time World Championship finalist Ali Carter has said he has a renewed enthusiasm for snooker following his recovery from cancer.

The 34-year-old was diagnosed with testicular cancer in June, but beating Adam Duffy 5-4 in a Shanghai Masters qualifier.

"This cancer scare has refocused me," he told BBC Essex.

"I thought to myself I've got to get my head down and do well while it's still there for me."

Chelmsford's Carter is but had been reaping the benefits of switching to a dairy and wheat-free diet and last season and reached the semi-final of the UK Championship.

The cancer setback meant he did not train for almost two months, but he believes he is now better prepared to win tournaments.

"I'm ready. I've been practising harder than I ever have - certainly compared to the last three or four years," said the number 16 in the world.

"I didn't put too much in to get that out. I'm one of the better players in the world. If I put more in, hopefully I can get more out the other end."

One of the Triple Crown titles - the UK Championship, Masters and World Championship - have become the overriding target.

"I'd like to win a big tournament in the UK. That world mean more to me than any other tournament.

"I want to earn some dough to be honest. I want to start winning the tournaments."