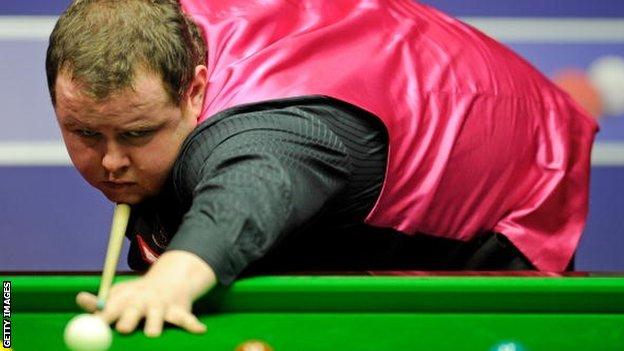 World Snooker chairman Barry Hearn says every one of the sport's matches is now being monitored to ensure cheats are caught, after Stephen Lee was found guilty of match fixing.

Joe Jogia: Suspended for two years in 2012 after a probe into suspicious betting patterns

John Higgins: Found guilty of 'giving the impression' he would breach betting rules, and of failing to report the approach in 2010. Banned for six months.

Quinten Hann: Banned for eight years in 2004 after being found guilty of breaking rules by agreeing to lose a match in exchange for money.

Peter Francisco: Found guilty of bringing the game into disrepute in 1995 and given a five-year suspension.

Hearn says weeding out match fixers is crucial to the sport's integrity.

He told BBC Radio 5 live: "The message is 'we can't stop you but we are going to catch you'."

He revealed special integrity units now look for suspect trends in games and are in regular contact with bookmakers to pick up on unusual betting patterns.

"We are diligently looking at every single game," Hearn added.

"Snooker's integrity units are watching every single game because we know that without integrity in our sport the sport's finished.

"If you break the rules you do so at your own peril and your career will be finished.

"We have enormous contact within the gaming industry globally - snooker's integrity is up there with the best in the world."

Lee, 38, denied the allegations which concerned seven matches played between 2008 and 2009.

But a tribunal in Bristol concluded that Lee deliberately lost matches against Ken Doherty and Marco Fu at the 2008 Malta Cup and agreed to lose the first frame against both Stephen Hendry and Mark King at the 2008 UK Championship.

In addition, Lee also lost matches by a pre-determined score to Neil Robertson at the 2008 Malta Cup and to Mark Selby at the 2009 China Open.

He similarly conspired to lose his 2009 World Championship first round match to Ryan Day, going on to be defeated 10-4.

There is no suggestion that any other player was aware of Lee's involvement.

Hearn says the guilty verdict means the sport is "sending out a positive message".

"You never want to come across this in any sport because it is a blow to the sport concerned," he said.

"But, perhaps in the wider picture, I'm very pleased that World Snooker and the WPBSA (World Professional Billiards and Snooker Association) pursued the case because it took a long time to accumulate the necessary evidence.

"Snooker is buzzing as a global sport and there's an awful lot of money to be made out there. That's all now gone for Stephen Lee and he's paying a price.

Who is snooker's crime buster?

"It's good news that we are on the ball and we set out our stall that we have zero tolerance.

"I hope, once again, we've sent out a message that we will find cheats and people who get involved in anything that affects the integrity of our sport."

World number 10 Mark Allen agreed that a strong deterrent was needed and wrote on Twitter: "It's took (sic) a long time but glad the Stephen Lee case is drawing to a close. Absolutely no place for that in our sport. Lifetime ban I hope."

Lee, the winner of five ranking titles, has been suspended since October 2012, when he was ranked eighth in the world.

Nigel Mawer, WPBSA disciplinary chairman, described the case as the worst case of snooker corruption he had seen.