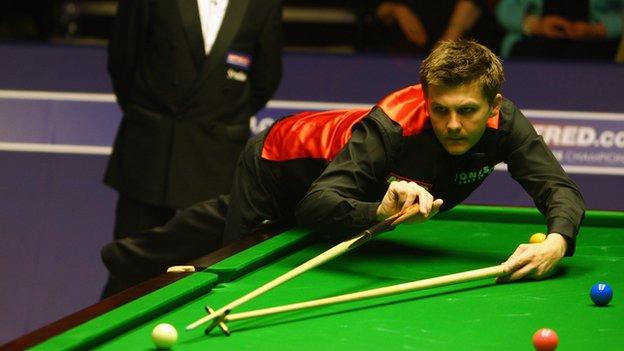 Ryan Day has spoken of his shock at discovering he was unwittingly involved in a fixed match against Stephen Lee at the 2009 World Championship.

Lee was found guilty of fixing seven games in 2008 and 2009, including his 10-4 first-round defeat by Day at the Crucible.

Welshman Day, 33, was first visited by investigators several years ago.

"I wasn't aware at all, not a single clue during the match, that anything was amiss," said the world number 27.

Speaking for the first time since Lee was found guilty, Day added: "There have been occasions when certain games have been questioned beforehand. You have heard there were certain betting patterns, but I heard nothing about any betting action at the time.

It is the Crucible, the World Championship, the pinnacle of the sport. When you get there, that is all you think about and it would never occur to you that there, of all places, anything like that would happen

"It is the Crucible, the World Championship, the pinnacle of the sport. When you get there, that is all you think about and it would never occur to you that there of all places anything like that would happen."

World Professional Billiards and Snooker Association chairman Jason Ferguson has already said that Lee faces a "significant sanction" when he learns the extent of his punishment on Tuesday.

Day added: "He has been found guilty on seven counts, seven charges of fixing, so, going on some past decisions, you would expect it to be a lengthy ban."

According to the full ruling, Sport Resolutions, an independent body specialising in sports arbitration, said groups associated with an ex-sponsor and ex-manager of Lee's made thousands of pounds by placing a series of bets on the Day game.

Day, a former world number six and three times a ranking tournament finalist, went on to beat Nigel Bond 13-5 in the second round in Sheffield before losing 13-11 to Mark Allen in a thrilling quarter-final.

2008 Malta Cup: Conspired to lose to Ken Doherty and Marco Fu, as well as losing to Neil Robertson by a pre-determined score, with the match ending 5-1 to Robertson.

2008 UK Championship: Agreed to lose the first frame in matches against Stephen Hendry and Mark King.

2009 World Championship: That Ryan Day would win by a pre-arranged score, Day winning 10-4.

Day said he only became aware of any potential wrongdoing when officials visited him at his club, the Veterans Snooker Club in Pontycymer, Wales, months later.

"I was first made aware of it when the Gambling Commission or the police came down to my club, to speak to me about the match, which was a bit of a shock," said Day.

"Back then, and that was maybe 2009 or 2010, it was fresher in the memory and they were asking me about certain shots in the match, appearing to have studied it going by the questions."

Day conceded that snooker's image had been tarnished.

"It does taint the sport, especially because most players are out there trying their hardest," he said.

"But the approach of the WPBSA and World Snooker has to be the right one. Everyone wants to make sure the sport is clean.

"A lengthy ban for Stephen Lee will be a step in the right direction and serve as a deterrent for anyone thinking about it."

WPBSA disciplinary chairman Nigel Mawer says only four cases, from a total of about 7,000 matches, have required further investigation since he took over as head of the sport's integrity unit in July 2011.

World Champion Ronnie O'Sullivan claimed earlier this week that he had heard of "many more players who throw snooker matches" - although he later retracted the comments, saying: "I was referring to rumours from years ago."

The four cases examined included the Stephen Lee case and that of Joe Jogia, who was banned for two years in July 2012 for breaching betting rules.

In November 2012, snooker's rulers decided to take no action after looking at betting patterns surrounding a 4-0 loss by Thepchaiya Un-Nooh to Steve Davis.

Mawer told BBC Sport: "We strongly refute Ronnie's allegations, and note he has now retracted them."

Asked if he felt corruption was widespread in snooker, he replied: "From my evidence-based approach and widespread monitoring of betting markets, this is categorically not the case."