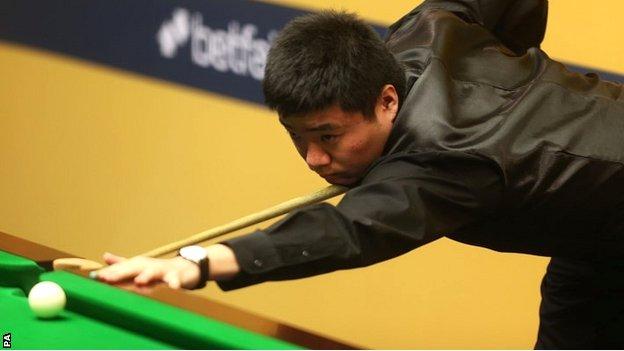 The world's top two ranked players, Neil Robertson and Mark Selby, were both beaten at the quarter-final stage of the Shanghai Masters.

Chinese world number 12 Ding Junhui fired a 109 in a 5-2 win over Robertson and will play Barry Hawkins, who fought back from 4-2 down to beat Selby 5-4.

He faces China's Xiao Guodong, who came from 4-2 down to beat Mark Davis 5-4 and also secure a maiden semi-final.

The Australian left-hander levelled the match with runs of 70 and 104 but Ding was the stronger player after the interval, capturing a scrappy fifth frame and then completing victory with a 75 and a century.

He maintained a two-frame advantage at 4-2 courtesy of a 68, but Hawkins, who beat Selby in the second round at the World Championship in April en route to the final, claimed the last three frames, levelling with a superb 140 and taking the decider 79-25.

"I'm delighted to come through a match like that," said Hawkins. "I'll need to be on top of my game tomorrow to have a chance of beating Ding.

"He is getting used to the expectation and the pressure he's put under here, because there are a lot of tournaments in China. To beat Neil 5-2, he must be playing well. I'm expecting a very tough game."

Holt, 35, turned professional in 1996, and has won two PTC events but had never previously been beyond the last eight of a ranking tournament.

Wilson had won four matches to qualify before knocking out Stuart Bingham and Marco Fu but had no answer to breaks of 85, 64 and 80 from his opponent.

"It feels brilliant," said Holt. "Kyren has great potential so it's a good win for me. The scoreline makes it looks easy but it wasn't like that, you go through so many emotions in a match.

"I'm disappointed that I haven't done this before but that's in the past and I can only look forward. I feel great physically and mentally."

Davis had been bidding for three consecutive titles having won the 6-Red World Championship and General Cup.

He made breaks of 63, 71 and 87 in building a 4-2 lead against 24-year-old Xiao but the Chinese player, whose previous career best was reaching the quarter-finals of the PTC Grand Finals in each of the last two seasons, dominated the final three frames, with successive runs of 61.