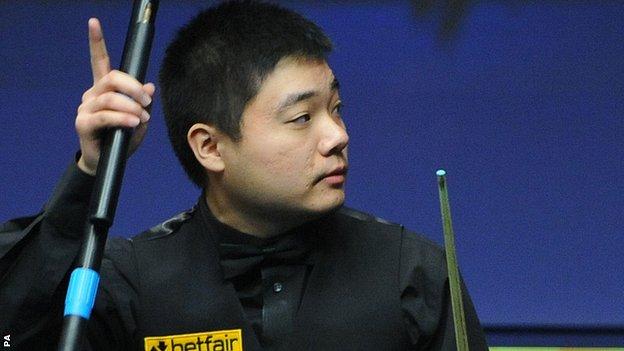 "I had to let my emotions go after winning the tournament," he said. "This showed how much I wanted this title. I wanted it more than anybody."

Xiao trailed 9-4 but took the next two frames before Ding came back with a clearance of 71 to take the title.

Ding's victory was his second on home soil following his 2005 China Open triumph.

He told World Snooker: "There was less pressure on me than in the past when I played here in China.

"I've been changing my game a little bit with a friend's help, and training a lot. Now I can concentrate more on my snooker and this win means a lot to my career."

Ding predicts a great future for the game in China and added: "Liang Wenbo has been in the final of this tournament too so hopefully there will be many more chances for the players from China.

"The young generation is growing up quickly so their days will come soon."

Xiao, who had never been further than the quarter-finals of a ranking event, said: "Today is a historic day, no matter whether I won or not. Two Chinese players performing a top-class match on a worldwide stage.

"I'm so proud of myself, being a Chinese player. I've always dreamed of winning a title but I wasn't very comfortable out there because this is my first ranking final. I'll be more relaxed next time.

"It's a special experience for me. I hope not to disappear from sight and hopefully I will take part in many more world class tournaments."