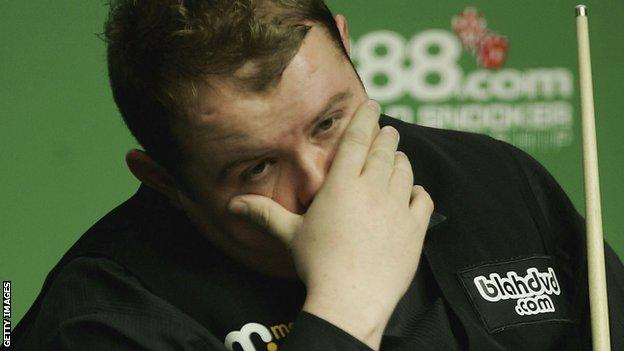 The world of snooker has been reacting to the news of Stephen Lee's 12-year ban from the sport for match-fixing.

It was described as "the worst case of corruption" ever seen by the World Professional Billiards and Snooker Association (WPBSA) but the Englishman insists he has done nothing wrong and plans to appeal.

Here, we round-up a selection of views after the 38-year-old was given the longest suspension in the sport's history.

"I don't think he can come back from this. He can keep playing and play money matches. But how long can you keep doing that? He's 39 years of age and has got a family to support.

"I think all the players would be in agreement that they feel sad for his family, but let this be a lesson to any player, not only in snooker but in any sport.

"[Having played in one of the fixed matches] I didn't notice anything.

"The match in question was in 2008 and the investigators came to interview me and a few of the other players who were involved in the seven different matches.

"Hand on heart I couldn't actually say I remembered anything in the game. It was five years ago and you play a lot of matches in those five years."

"I am friends with Stephen and he was in the next era behind me. A lovely fella, a family man and I feel sorry for his family because he has a missus and four children but as a player, I don't have any sympathy for him.

"I just don't get the concept of it. He must have had a gun to his head, that is the only thing I can think of.

"It could only have been a financial thing where he has been told either you do it or your family suffers. There are many other ways of getting money so I don't know the position he was put in.

"At the end of the day, he beat me 9-4 and I had given him a frame start. It is quite frustrating and hurtful. I was there trying my best and him gaining financially for letting me win the first frame maybe let him relax a bit more because he had X amount of pounds in his pocket."

"Anything over 10 years was right, I think. It sends out a strong message to everyone that snooker's trying to stamp out cheating. Every other player now knows they can't do it.

"Obviously if I got approached I'd go to Barry [Hearn, World Snooker chairman] and everyone straight away.

"Some people find it a little bit harder and give into temptation. For me, I've been brought up wanting to win every game, that's just my mindset but other people obviously think differently."

"We are very proud of our game - it has been a great sportsmanship game over the years with the likes of Ray Reardon, John Spencer, Steve Davis and Stephen Hendry. Now we have a great batch of young players capable of winning everything and it is such a shame to have the game tarnished.

"With the length of the ban, we know the snooker association are not going to mess about if anyone is found guilty of any wrongdoing.

"We have set a mark now, set a target that players know if they get caught, they get a heavy fine and ban."

"The courts today don't seem to like to give out lifetime bans in any sport, this seems to be the policy generally.

"But 12 years out of the professional circuit - it's going to be a mountain to come back from that, I don't see any way back.

"We can never stop human nature, there'll always be temptation to take the easy road.

"But what they've got to do is understand the penalties and the punishments that are handed out if they err."

"We take no pride in having to deal with such serious issues.

"However this demonstrates our commitment to ensuring that snooker is free from corruption.

"It is an important part of our anti-corruption approach that players found to be involved in fixing matches or any aspect of a match are severely dealt with.

"We work closely with partners globally and the message we are sending is that if you get involved in match fixing you will be found out and removed from the sport."