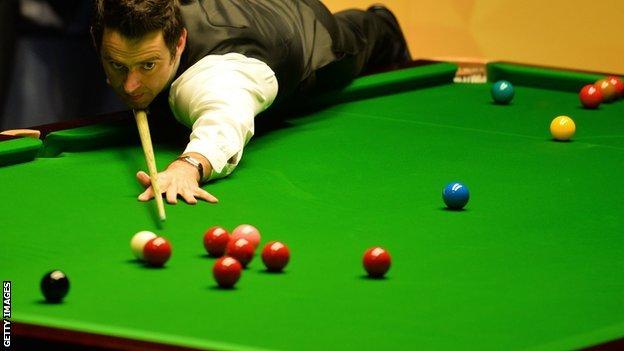 Jimmy White says Ronnie O'Sullivan is looking "dangerous" ahead of the International Open in China.

O'Sullivan is playing in his first ranking event since winning the world title in May, a crown he won after only one match in the previous year.

"I played in an exhibition with Ronnie recently and he is in good form. He is up for the tournament and wants to do his best," White told BBC Sport.

O'Sullivan plays world number 46 Anthony McGill in the first round.

World number one Neil Robertson, four-time world champion John Higgins and Mark Selby, who is second in the rankings, will all be in action in the tournament which starts on Sunday in Chengdu, along with defending champion Judd Trump.

China's Ding Junhui became the first player for 10 years to win back-to-back ranking events in the same season following triumphs at the Shanghai Masters in September and Indian Open earlier this month.

O'Sullivan was the last player to achieve the feat in 2003 and White feels home favourite Ding is the only man who can stop the world champion, with the pair potentially looking at a semi-final meeting.

"Ronnie is looking very dangerous and wants to play a lot of snooker this season," said White. "But in China, his main rival will be Ding."

Despite beating holder Ricky Walden in the Wuxi Classic, White has experienced a disappointing season, failing to get past the last 32 in any of the four ranking events and slipping to 58th in the world.

Having had surgery recently on a foot problem, White admits he is not too sure what to expect from his wildcard-round opponent Yuan Sijun.

"I know Yuan has played Matt Selt in one of the PTC events, but I don't know anything else about him," said the 51-year-old.

"If I win I will face Barry Hawkins in the first round and he is probably the most improved player on the circuit in the last few years.

"I have been practicing over the last couple of weeks and everything is good, but I need to get some points in order to move up the rankings."