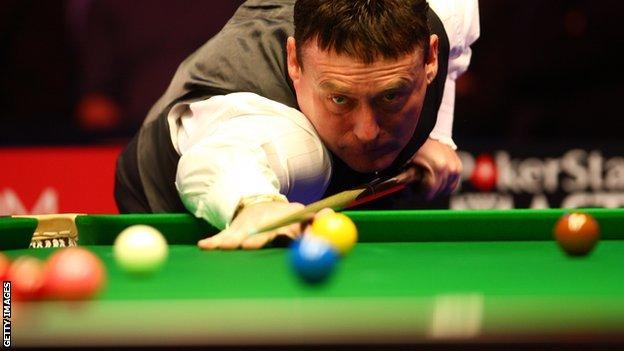 Six-time beaten finalist Jimmy White says it is "inevitable" the World Championship will move from Sheffield to China at some point.

Snooker's showpiece event has been held at the Crucible Theatre since 1977.

Much like Wimbledon wouldn't move to America, the World Championship won't move to China

"I would always want to see the World Championship stay where it is but it will go to China one day. I can't see it not happening," said White, 51.

But World Snooker chairman Barry Hearn rejected White's claims and said "it will never move in my lifetime".

Five of the sport's 11 ranking events are held in China, which also hosts minor tournaments on the Asian Tour.

Chinese players have enjoyed increasing success in recent years. In September Ju Reti, 30, became the first amateur to win a European or Asian Tour event, while there were four players representing the country at the 2012 World Championship.

His victories at the Shanghai Masters in September - the first all-Chinese final - and the Indian Open earlier this month saw him move up to fourth in the rankings.

"The people in China love their snooker. We get a fantastic reception when we go over there," said left-handed Englishman White.

"But if Ding keeps performing the way he has been doing then it is inevitable the World Championship will go to his country."

Hearn has shaken up the sport since taking over as chairman in 2009, increasing the number of ranking tournaments from six to 11, while also creating a number of Players Tour Championship events.

And from the beginning of this season, Hearn introduced measures which mean all 128 professionals are required to play from round one in eight major tournaments. Previously, the top 16 players have automatically gone through to the last-32 stage.

However, he made it clear the sport's main event will stay at the "Home of Snooker".

"I am the chairman of World Snooker. I make the decisions so it is not inevitable that the World Championship will move to China," Hearn told BBC Sport.

"I have made this clear many times. It is a major traditional British event, like Wimbledon, and while we have the backing of the BBC and other sponsors, it will never move from the Crucible.

"Much like Wimbledon wouldn't move to America for financial reasons, the World Championship won't move to China either. Not in my lifetime and not for as long as I am chairman."

Ronnie O'Sullivan is the reigning world champion after beating Barry Hawkins in May.