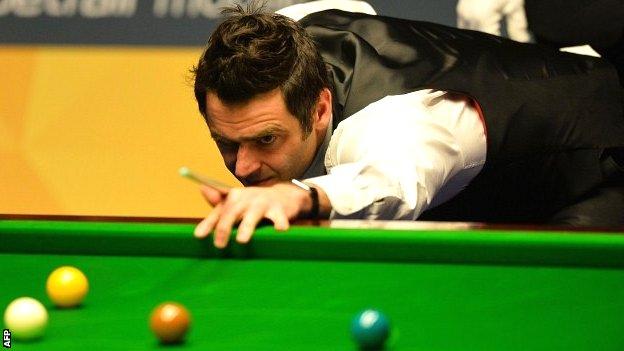 O'Sullivan, in his first ranking event since winning the world title in May, won the first three frames and led 4-1 before Liang's comeback.

Liang had lost all four of his previous matches against the 37-year-old.

"To lose five frames on the trot is not good - that's a worrying sign," O'Sullivan said.

"This is only my fifth tournament in 18 months, so I am a bit rusty. Only playing in events will rectify that and I've got another four or five tournaments coming up."

O'Sullivan's world ranking has dropped to 31 during his absences from the sport.

He played only one competitive match between winning the World Championship in 2012 and defending it at the Crucible earlier this year.

But after comfortably defeating Anthony McGill 6-2 in the opening round, the five-time world champion looked certain to make further progress against world number 31 Liang, won the Zhengzhou Open on the Asia Tour this month.

O'Sullivan moved within two frames of victory courtesy of top breaks of 120 and 121.

But having taken frame six, Liang cleared to the black after O'Sullivan had missed a tricky green to a baulk corner.

A superb 118 from the Chinese player levelled the match at 4-4 and he came from 48-0 down to win frame nine and take the lead.

Both players had chances in the next, and it was Liang who converted an excellent pot on a red to a centre pocket to initiate a match-winning 49.

"It has been a fantastic event in a great city and I'm sad that I'm not playing any more. Every time I come to China I have a lot of support and I love the fans here, so I'm sorry I wasn't able to play my best. I hope I'll come back stronger."

The gifted teenager, having defeated Steve Davis 6-1 and Craig Steadman 6-2, ousted Crucible finalist Hawkins with top breaks of 62 and 63.

World number one Neil Robertson, who lost 10-8 to Judd Trump in the inaugural final last year, recorded three centuries in a 6-1 win over Thepchaiya Un-Nooh, taking his tally of tons for the season to 38.

The Australian left-hander, who will play Peter Ebdon in the next round, equalled the highest break of the tournament with a 143 in the first frame, and went on to post further runs of 100, 54, 74, 100 and 77.

Mark Selby, the world number two, trailed three times against Peter Lines, but eventually came through 6-4, making a 116 in the last frame.