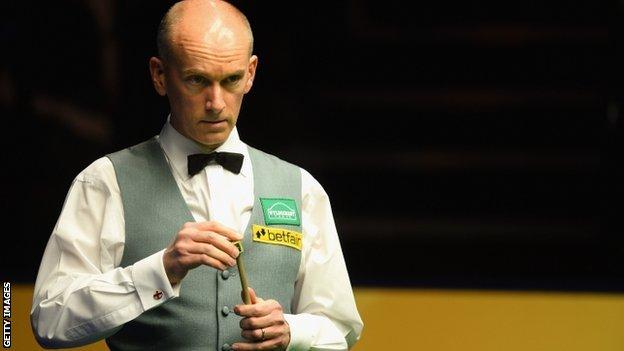 Former world champion Peter Ebdon held his nerve in the deciding frame to beat world number one Neil Robertson at the International Championship in China.

The Englishman, 43, saw a 5-3 lead slip before clinching a 6-5 victory over Australia's Robertson in Chengdu.

Ebdon will face the in-form Ding Junhui in the last eight after the Chinese star beat Welshman Matthew Stevens 6-1.

Ding is trying to become the first player since Stephen Hendry in 1990 to win three consecutive ranking events.

"I've already had a few messages from people back in the UK saying I look better when I'm getting on with it. I felt as if I was competing.

Robertson said: "I guess it's a shame I didn't get to play Ding in the quarter-finals as we're the best two players in the world at the moment.

"If Peter plays Ding and plays like he did today, I think he will probably win. Ding will have to be very patient and maintain a good temperament."

He will play Marco Fu in the quarter-finals after the Hong Kong player defeated Chinese 16-year-old Zhao Xintong 6-2.