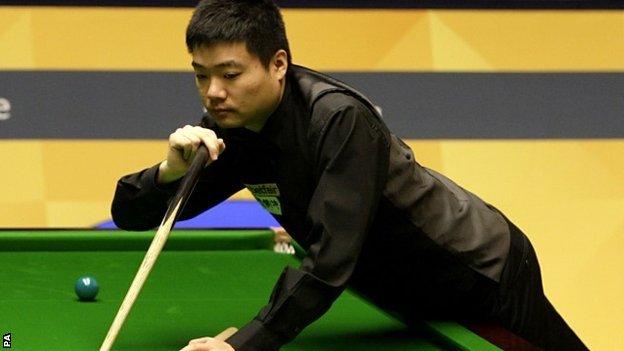 China's Ding Junhui stayed on course for a third successive ranking title with a 6-3 win over Peter Ebdon in their International Championship quarter-final in Chengdu.

Ding is aiming to become the first man since Stephen Hendry in 1990 to win three major ranking events in a row.

He needed over four hours to beat Ebdon and will face Scotland's Graeme Dott in the last four.

I have a lot of Chinese fans. Unfortunately I let them down most of the time

Mark Selby's hopes of adding the International Championship to his UK and Masters titles were dashed by Hong Kong's Marco Fu.

Selby went down 6-5 to Fu after failing to capitalise on a 5-3 lead.

He will now face Joe Perry, who beat Ryan Day 6-1, in the semis.

Fu told worldsnooker.com: "This will be my first semi-final at a ranking tournament in China.

"I lost first-round matches many times and my best performance here was quarter-finals. I have made a breakthrough this time and hopefully I can do better tomorrow.

"I really want to have a good run here because I have a lot of Chinese fans. Unfortunately I let them down most of the time. I hope my momentum goes on."

Perry lost the first frame against Welshman Day but then reeled off the next six.

"I saw how well Ryan played yesterday so I expected a really tough game today," said Perry. "He has beaten me a few times in the past. I knew I'd have to play well today, and luckily I did."