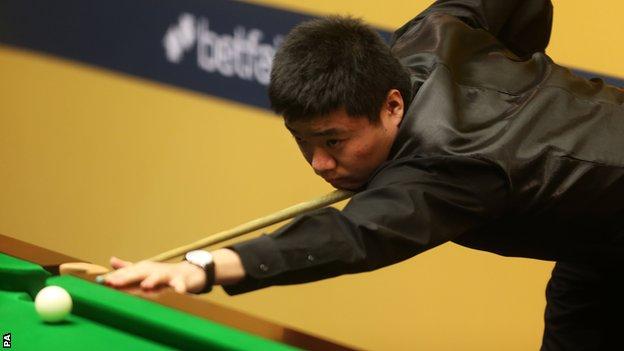 Ding Junhui is a win away from a hat-trick of ranking titles after beating Graeme Dott 9-7 in the semi-finals of the International Championship.

But Ding, aiming to become the first man since Stephen Hendry in 1993 to win three ranking events in a row, ended the Scot's resistance in frame 16.

Ding, 26, has already won the Shanghai Masters in September and October's Indian Open.

Now he is bidding for his ninth ranking title at the International Championship, where victory would move him level with Peter Ebdon and John Parrott in career wins.

But he had to resist a stirring fightback from Dott to earn his place against Fu, who beat Joe Perry in the other last-four clash.

The pair shared the first four frames before Ding pounced on a loose safety on the final brown to take a 5-3 lead at the end of the first session.

After the interval, he took charge with a clearance of 31 in the ninth frame and runs of 50 and 40 in the 10th.

However, former world champion Dott won three frames in a row with breaks of 72, 75 and 83 before Ding stopped him drawing level with a superb 121.

Dott compiled a 57 to keep him within a frame at 8-7 and the match appeared to be heading for a deciding frame as the Scot built a 62-6 lead in the 16th.

However, the Chinese player produced an outstanding clearance of 63, despite several reds sitting close to the cushion, to earn his place in the final.