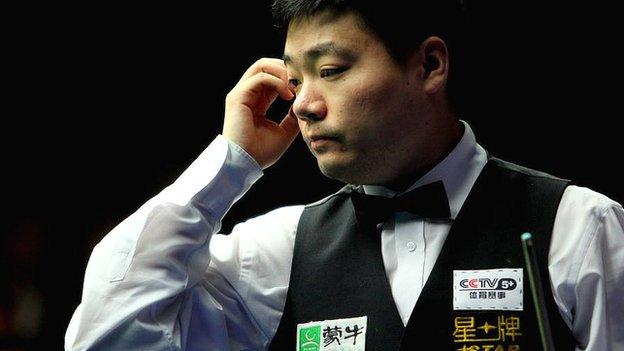 Ding Junhui secured his third ranking title in a row with a 10-9 victory over Marco Fu in the final of the International Championship in Chengdu.

Hong Kong's Fu led 9-8 but Ding won the last two frames, compiling a break of 91 in the decider.

China's Ding, 26, also won the Shanghai Masters in September and the Indian Open in October.

He is the first man since Scotland's Stephen Hendry in 1993 to win three consecutive ranking events.

The match between Ding and Fu was also the third consecutive all-Asian ranking final.

Ding, who moves up to a career-high third in the world rankings, has won £257,000 in prize money over a six-week period and joins Peter Ebdon and John Parrott on nine ranking wins.

Fu, 35, is also enjoying a profitable season having won the Australian Goldfields Open to regain a place in the top 16 of the world rankings.

The next ranking event is the UK Championship in York, which starts on 26 November and will be shown live on the BBC. England's Mark Selby is the defending champion.