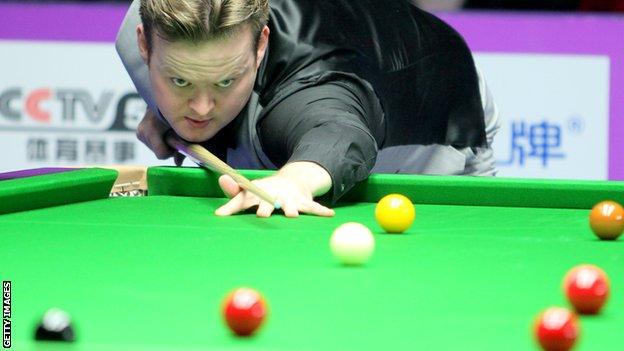 Former world champion Shaun Murphy says he has altered his diet in an attempt to win his first Masters title.

The Sale player has not lifted a trophy since the 2011 Brazil Masters and faces a tough match against China's Ding Junhui in the first round.

"It has been a real education to learn about diet for the first time. In the past, my relationship with food was always based on how I felt."

And if he does triumph at Alexandra Palace in London, he will become only the ninth player in the history of the sport to win the Triple Crown.

Murphy, who secured the second 147 maximum break of his career in the Championship League on Wednesday, hopes the adjustments he has made can give him an edge and help improve his stamina and concentration at the table.

"As a sportsman you are constantly up and down and that affected my diet," he said.

"Since August, I have stopped eating things which I don't deem to be good for me.

"I eat a lot of fruit and vegetables, though I haven't gone vegan like Peter Ebdon. I've given up fizzy drinks and I just drink a lot of water instead, plus I've given up chocolate. I'm just generally being healthier.

"Having done it and enjoyed the rewards of it, I wish I had done this years ago. It's not easy and you need motivation to do it. It's really about having the discipline to make the right choices."

Coming up against Ding in his opening match on Tuesday, in arguably the tie of the round, "The Magician" has a difficult task against an in-form player who, at one point this season, won three consecutive ranking titles.

"I've been going through a tough time on the table," admits world number eight Murphy.

"I keep coming up against players who play fantastic snooker against me and deserve their victories.

"There's not much I can try other than good old-fashioned hard work. I have improved the weaknesses in my game and I know that good things are just around the corner."