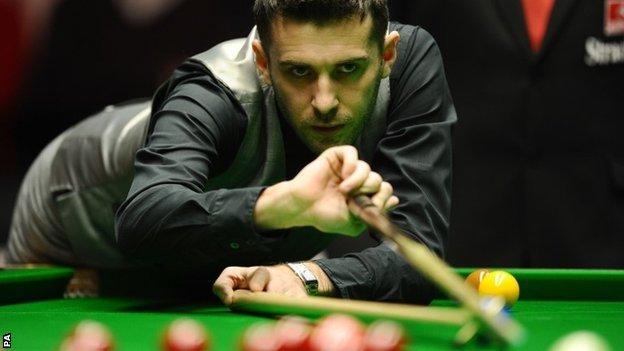 Defending champion Mark Selby survived a Mark Davis fightback as he won their first-round clash at the Masters 6-5.

Selby hit three half-century breaks as he won the first four frames before Davis hit back to trail 5-3 and then forced a decider.

But Selby regained his composure to win a cagey 55-minute final frame after a lengthy safety exchange.

He is aiming to be just the fourth person to successfully defend the title.

He took a 4-0 lead into the mid-session interval against Davis before facing some resistance.

After taking the fifth and sixth frames, Davis had chances to claim the seventh, missing a straightforward red which allowed Selby to go 5-2 up.

Davis then took the next three frames to level the scores, including the tournament's first century in the eighth frame.

The decider was a tense affair with both players missing pots at the start of the frame but Selby finally knocked a red into the middle pocket to move into the quarter-finals.

Higgins built a commanding 5-1 lead in his first round encounter with Bingham.

A brief rally from 37-year-old Basildon-born Bingham saw him cut the deficit to 5-2, but after surviving a late scare with a snooker on the green, Higgins won the next frame to join Selby in the last eight.